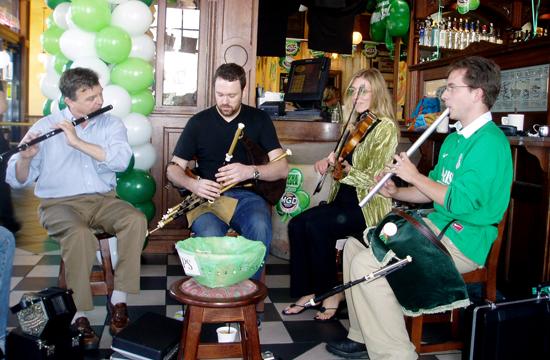 You don’t need to travel far to find plenty of Irish spirit on St. Patrick’s Day. In Santa Monica these Irish pubs and restaurants are gearing up for the big celebration on Thursday. Here’s a preview of some of the festivities being planned at press time.

Willy O’Sullivan, from Cork City, Ireland, is proud of the sense of community that has grown over the years at his neighborhood pub and restaurant. O’Sullivan says the pub is true in spirit to traditional Irish pub culture; not a scene but a place where the community gathers to meet over a Guinness or two. Memorial plaques mark the special occasions celebrated here by regular customers who have found a home at this warm pub. Its name is inspired by the Miles O’Brien character played by Irish actor Colm Meaney on Star Trek Deep Space Nine. Lunch and dinner served; O’Briens is famous for fish and chips, shepherd’s pie, and burgers.

On St. Patrick’s Day: O’Briens will open at 8 a.m. There will be green beer on tap and a special St. Patrick’s Day menu of shepherd’s pie, fish and chips, corned beef and cabbage, bangers and mash, or Irish stew; all $16.

Belfast native, chef and animal rescue advocate Geraldine Gilliland opened this Irish pub/restaurant on St. Patrick’s Day 2002 and has been serving up Irish charm ever since. Dark wood, Celtic carvings, and glass etchings of the pub’s namesake, mythical Irish warrior Fionn mac Cumhail, bring a taste of Gilliland’s home to Santa Monica. The centerpiece bar was shipped from a Dublin pub owned by Gilliland’s late stepfather and reconstructed here. The menu includes many varieties of the traditional Irish potato pancakes known as boxtys. Sundays nights are traditional Irish music nights.

On St. Patrick’s Day: Doors open at 9 a.m. and a special pub grub menu will be served until 10 p.m. Maria Tomas Griffin and the Bracken Band play traditional Irish music from 1 to 5 p.m., and Hoochie Coo will rock the house from 9 p.m. to closing. A $10 cover charge applies from 2 p.m. Free goodies and treats from Bushmills, Budweiser, and others.

What was once a modest Boston sports bar has shifted into an Irish sports gastropub with an upgraded beer and wine list and a new menu. General Manager Sean Juergens says full-bellied Ipswich clams are flown in weekly from Massachusetts for the fried clams with housemade tartar sauce ($14), a New Englander’s dream. The chalkboard outside boasts “the biggest draft beer selection on the Westside” and 23 swiveling TV monitors so nobody misses a minute of their favorite sports game. Dart boards with steel-tipped darts, live bands, a pool table, and karaoke keep the fun flowing at this friendly place. Sonny’s refurbished ambiance has inspired the Coors beer company to film its latest TV ad campaign here.

On St. Patrick’s Day: Sonny’s will open at 9 a.m. There will be drink promotions and giveaways, a short menu of favorite Irish dishes, a limerick contest, and live bands that begin playing at noon. The parking lot will be transformed into a beer garden, outfitted with AstroTurf, tables, air-conditioned Porta Potties and a beer stage with five taps.

Not to be confused with O’Briens on Wilshire Boulevard, this pub has been serving brews, whiskeys, and spirits at the southern end of Main Street for 13 years. A back room has a stage for live music, comedy, and trivia games. Last week the pub’s ownership changed hands; expect changes to the menu and other areas in the months ahead.

By mirrormmg March 15, 2011
in Life and Arts
Related Posts