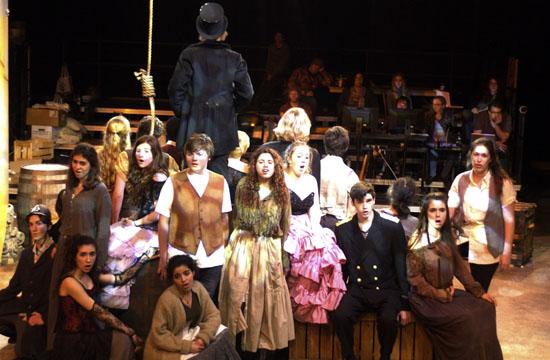 The controversial Bertold Brecht-Kurt Weill musical “The Threepenny Opera” is not the usual fare for a high school production. Originally produced in Berlin in 1929 and banned by the Nazis, this adaptation of the earlier “Beggar’s Opera” deals with gangsters, prostitutes, deception, betrayal, and exploitation of the poor, infused with Brecht’s socialist perspective and Weill’s off-beat music. But Santa Monica High School Theatre’s mounting of this audacious work was something to see.

The storyline revolves around a Victorian-era thief known as Captain MacHeath or Mack the Knife (yes, this is the show that features that song). Mack has run off with Polly, the innocent daughter of Peachum, “The Beggar’s Friend,” who exploits the poor for his own profit by “teaching” them how to beg, how to look and act destitute, even selling them pre-dirtied clothing and “stumps.” Despite his shady profession, Peachum and his wife are shocked by her elopement with a gangster and they seek to break up the marriage by having Mack arrested. Of course, Mack is best buddies with the chief of police, who is both on the take and rather a coward. Then again, Mack’s old flame Jenny, who works in a local brothel, has no scruples about turning Mack in for a tidy sum.

D.B. Hovis, Samohi’s theatre director, staged “The Threepenny Opera” in a theater-in-the-round format that greatly streamlined the logistics of the three-act production. A few pieces of furniture and a few props enhanced each scene and cast members doubled as stagehands, carrying props on and off “stage” while musical numbers provide the transition. At one side of the stage area, an eight-piece band, directed by Terry Sakow, provided accompaniment. Nate Hodges, a professional choreographer with the company Rogue Artists, provided the impressive dance moves. Two students, Raven Bennett and Emmet Storms, served as assistant directors on a few scenes and Bennett even choreographed a tango by the Peachums, seen in the first act.

Students often suggest play titles to Samohi Theatre and Bennett suggested “The Threepenny Opera” because it was her father’s favorite musical.

“It’s a play I have wanted to direct for years,” Hovis told the Mirror. “It seemed like the right time to do it.”

Hovis said that the English-language text he relied upon (since the original play was in German) was Mark Blitzstein’s adaptation. However, he mixed in some song lyrics from a more recent adaptation.

Those familiar with Bobby Darin’s hit version of “Mack the Knife” will discover that the song has almost twice as many verses, each verse describing a crime allegedly committed by this prince of thieves. In Hovis’ production, each verse was sung by a different member of the ensemble, as the opening scene in the play.

Taylor Weary, who played tenor sax in the backup band, said that she and several other students had to learn to play new instruments for this production. Playing Weill’s sometimes atonal music was definitely a challenge but she praised pianist Inna Ganelis (accompanist for music director Jeff Huls) for helping the students.

Kadar Vernes, a Samohi junior who has already had some professional experience, took on the task of developing Mack the Knife from a variety of sources. “I used my dad for the anger and Snoop Dogg for the pimp attitude. I myself have sort of a cocky personality.”

Alice Kors, who played Polly, noted that Brecht’s plays “send a message about how the world is corrupt… The theme of everything is that things don’t turn out the way you expect.” Both Kors and Vernes found the experience of acting in a Brecht play to be thought-provoking.

By mirrormmg March 9, 2011
in Life and Arts
Related Posts