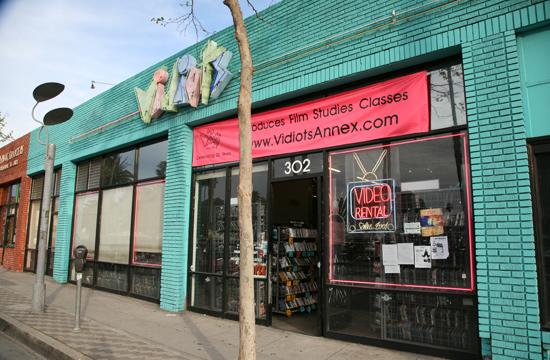 Patty Polinger wasn’t crazy about sharing the news that it is tough times for the video store she’s owned and operated with her friend Cathy Tauber in Santa Monica since 1985.

After a lean couple of months beginning in December 2010, Vidiots realized it had to do something or close its doors at 302 Pico Boulevard.

“The last two letters I’ve written are probably the hardest thing I’ve ever had to do in business because I’m not used to asking people for help,” Polinger said, “but it was just the reality of the situation.”

Vidiots can reasonably be called a Santa Monica institution. For more than a quarter of a century the brightly painted building has provided diverse and compelling video rentals for the city by the sea. Its owners and customers share a belief that Vidiots is more of a cultural resource rather than just a friendly independent video rental store.

If you live in Santa Monica, chances are you’re either a customer or you know someone who frequently walks through those doors framed by turquoise bricks, below the unmistakable neon sign. And it turns out to be a very good thing that a video rental store has a lot of friends.

“I felt like if [closing] is a real reality, people will be upset if they just come and they see our doors are closed and we didn’t give them a heads up” Polinger explained.

At the same time business slowed, Polinger said their bank cut off a line of credit that had remained intact during previous crisis periods. There was a small upside – getting cut off meant they weren’t taking on as much debt. Still, something had to give, so Tauber and Polinger decided to forgo their salaries for a while. But business kept declining and the bulb in Vidiots projector seemed to be getting dimmer.

“In December we thought, well, if we can hang on at least January and February will be good” Tauber said. “And then there was no rain in January and the rain always helps. January was awful and we thought, ‘This is it.’ We are going to be continuing to go into more debt. We were putting inventory on credit cards and getting later in paying our rent… and we never operated like that.”

“What were our options? We were talking to others about people that liquidate. You know… we were trying to figure out what are our options are,” she said. “I thought, whatever happens, I would love to keep our collection together because it’s been 25 years. There are things we have that no one else has…”

Then Polinger and Tauber sent out the two e-mails to customers. The first one in early February described their situation and explained that if every person who received the mail would come in right now and rent even one DVD, they’d be able to keep going.

“We got an immediate response from the first letter,” Tauber said. “An immediate increase, I mean really… an outpouring of support. People pledging to come in once a week and rent.”

A second e-mail this month explained a new program at Vidiots where customers could become something more akin to benefactors by joining at Platinum, Gold, and Silver levels of $1,000, $500, and $250 and receiving unlimited rentals for one year plus other perks. Those proposals are also having a good response. In addition, letting people know about their situation generated heartfelt communication between Vidiots and its customers. A statement near the bottom of the March appeal for support reads “Hearing the personal stories of how Vidiots impacts people both individually and as part of the community has been both amazing and heart warming.”

When Vidiots first opened, the store occupied only a thousand square feet of its corner location. They’ve grown from 800 titles to more than 40,000. In the early days, all of the films were on VHS. “There was debate at the time about going with BETA,” Tauber said with a laugh, and added, “But we didn’t have the money. Luckily.”

The store has maintained a distinct non-Blockbuster personality, and somewhere there’s a penchant for the color pink. The neon logos are pink, as are the rubber bands that hold together the stacks of rented videos ready to leave the store. Shelves in Vidiots organize films by genre, as well as by directors, and there are sections with “favorites” selected by store staff. A recent cluster of DVD’s featured the work of actors and directors who did well at the Academy Awards this year, including movies with actor Christian Bale going back to his child actor work in “Empire of the Sun.”

Inside Vidiots there’s exuberance about film that aligns almost exactly with the vibe in independent and vinyl-intensive record stores. That energy grew to such a level that Polinger and Tauber built the Annex, a separate screening and lecture facility inside the store for classes and special events. And, they would like you to know, you can rent it for your own special events.

In the course of growing the store there have been times of doubt for Vidiots similar to the recent hardships. “When Blockbuster was coming to California,” explained Tauber, “we thought… well, that was it. We’d be gone. But it actually helped us because, unfortunately, Blockbuster put all the other little guys out of business. There was Main Street video… we pretty much got all their business when they closed.”

Polinger was certain that Pay-per-view would bring about the end of video rental, but that didn’t quite catch on as projected by its supporters. Then Netflix exploded, and that seemed a likely candidate for the next iceberg to hit Vidiots.

But this past December, what struck Vidiots was something more akin to a perfect storm.

Business was down, the line of credit went away, and then there’s always the matter of inventory. An inventory of films, especially recent hits, basically defines a video rental store. In the past few months, Polinger and Tauber have taken to buying new videos for their inventory on a credit card, something they’ve never had to do before. Additionally, competing models for video rental businesses such as the huge Netflix operation are able to finance large numbers of copies of same title popular films. That’s something a neighborhood operation like Vidiots can’t do, even though customers have asked them to duplicate the Netflix model and let everybody off the hook for late fees.

Tauber said people don’t understand how a “Dollar a day” model for rental means the titles are out of the store, so that means customers can’t get titles they want and you’re now compelled to buy more inventory or be serious about those late fees. “To rent a video again” Tauber said, “somebody has to return it and… they don’t really understand why we charge the late fees.”

When pressed about their own view of the loss to Santa Monica if Vidiots were unable to survive, Tauber and Polinger took a long pause to reflect.

Polinger begins, “The teacher not having a way to get the film that they’re thinking of showing to their students. Having the musical theater kid coming in and wanting to see the original production of something and not being able to see it.”

And then, in the way that the long time friends finish each others thoughts, Tauber added, “The production company that’s doing research on a cinematographer who comes in and wants to see everything the guy has done and needs it that day… or a company studying certain kinds of scenes. And… just a place to come in and talk to someone behind the counter about a movie you saw or one that someone recommended to you.”

By mirrormmg March 16, 2011
in Life and Arts
Related Posts