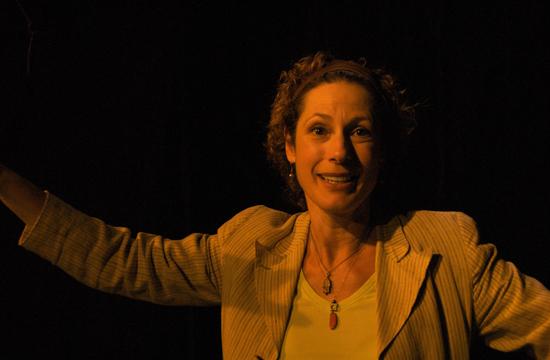 During the opening night performances at the Los Angeles Women’s Theatre Festival, there may have been a technical glitch during a video that was part of Vanessa Adams- Harris’ moving piece “Rosa Parks: My Story-A Simple Act of Courage.” Harris had portrayed Rosa Parks, speaking of her activism and reading letters from admirers and haters alike. The performance concluded with a video that featured the song “We Shall Overcome.” The sound went dead during the song, but the audience picked it up and sang the rest of the song, becoming part of the performance.

That warmth, trust, and creativity are characteristic of the festival, which is celebrating its 18th year in the Los Angeles area. Apropos of the anniversary, the festival’s theme was “Coming of Age.”

Opening night featured a champagne reception and awards ceremony, with the awards spaced in between performances which included, in addition to Adams-Harris, “Artemis,” a dance piece by Ingrid Graham that received enthusiastic applause, and “Blondie in Arabia,” a funny piece by Monica Hunken, dealing with her travels in the Middle East.

Co-hosts Hattie Winston (from the sitcom “Becker”) and Florence LaRue, onetime singer with the Fifth Dimension, exchanged jokes, and LaRue gave a moving rendition of “Wind Beneath My Wings,” a song chosen for its relevance to the evening’s theme of “Standing on the Shoulders Of.”

The “Maverick Award,” for an artist whose work has set a high standard of individuality and self-styled creativity, went to opera singer Suzanna Guzman. She confessed that she started out as a rock singer and began singing opera as physical therapy, never dreaming that her “therapy” would lead to a new career.

Veteran actor Joan Benedict Steiger won the “Eternity Award,” for lifetime achievement. Expressing some amusement at an award that was named “eternity,” she added “ever since I was a little girl, all I wanted was to be an actor or a singer.”

The “Integrity Award” went to Charmaine Jefferson (executive director of the California African-American Museum and arts advocate), while the “Rainbow Award” for achievements in multicultural creativity went to Velina Hasu Houston, a playwright of mixed African-American, Japanese, and Blackfoot heritage, whose plays have dealt with cultural diversity.

Friday night’s highlights included Taffy Wallace’s “Next Exit: Beautiful Life,” in which she proved adept at transforming herself into a youngster at the ages of ten and 13, struggling with racism, assimilation issues, body image, and teenage crushes on rock stars.

Erin Parks’ “Bonnie in Brighton” was a deftly handled narrative about a young woman’s adventures in England as she developed an alter ego who dared to do things she had never thought of doing.

Saturday’s program brought out tales of family and ethnic issues. Ashanti Brown, in “Hell on Me,” told of her parents’ emotional and dependency problems, captured both on video and by Brown’s amazing portrayals of her mother and father. Michelle Glick’s “Asian Belle” dealt with her youth as a part-Vietnamese girl in the American South who wanted to hide her Asian heritage until she learned to appreciate it. Saria Idana’s “Homeless in Homeland” was a strong piece about a young American Jewish woman seeking a way to reconcile her Jewish identity with the Israeli-Palestinian conflict.

The festival’s conclusion on Sunday featured works about survival and historic personages. Kres Mersky drew laughs with “The Life and Times of A. Einstein,” portraying Einstein’s secretary. Leslie McCurdy’s “The Spirit of Harriet Tubman” chronicled the life of the Civil War era activist who helped slaves escape, while British actor Gael le Cornec’s “Frida Kahlo: Viva La Vida!” rendered the famous Mexican artist in a world that embodied the images of her paintings. Later in the evening, 75-year-old Bonnie Weiss astonished the audience with her dances.

The six shows drew full audiences, an encouraging sign for the future of LAWTF. The event was made possible by the hard work of a small and determined group of theatre people and others, led by actor-writer Adilah Barnes. In the festival program, Barnes noted: “At a time when many theatres have gone under or had major cutbacks, due in part to our government or corporate funders, LAWTF has had a milestone year.” She urged attendees to tell their families and friends about the festival and other theatre events.

By mirrormmg March 29, 2011
in Life and Arts
Related Posts