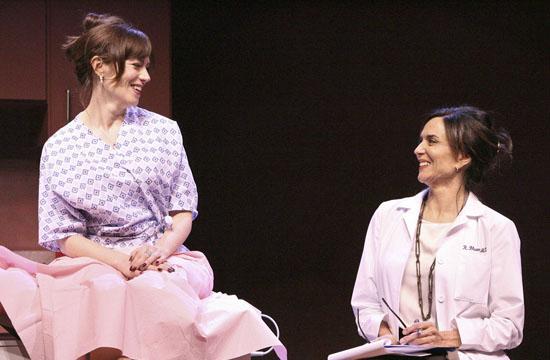 From the moment the captivating Maggie Siff steps on stage for her opening monologue to the audience as Charlotte, the happy-go-lucky hooker, in the world premiere of Jane Anderson’s “The Escort,” we know we’re in for an amusing journey with this lovable, high-priced call girl.

Siff explains why the nudity will be implied through the use of her flesh colored body suit sporting giant cartoon breasts with enormous nipples at which point she opens her robe for audience perusal. The playwright was fearful, she explains, that the audience would be so busy looking at body parts that they would not pay attention to her writing.

Soon Charlotte is joined by the most incredibly talented Gabriel Sunday, who plays both the 13-year-old son of his divorced parents, the Doctors Bloom, and the super stud in Act 2. Gabriel, likewise, opens his robe to reveal, well let’s say, a very overly endowed member that caused quite a few audience titters. In his dual roles, Gabriel, who possesses a powerful stage presence, delivers his lines with impeccable comic timing.

If that’s not enough, she also has season tickets to the Philharmonic and loves the café at the Metropolitan Museum of Art that features a string quartet. “Mahler makes me wet,” quips Rhona, one of the many deliciously amusing lines sprinkled throughout this well-written play. She also waxes philosophical with a line like,” I don’t hold grudges. It’s the only way to keep our heart light.” How could one not love her?

Besides not have a sex life of her own, Rhona is dealing with her teenage son Lewis, who seems to spend an inordinate amount of time checking out porno sites. She meets with her ex-husband, the other Dr. Bloom, played very well by James Eckhouse, who, by the way, is not getting any either, and we begin to see the rather dysfunctional family dynamic unfold. Bloom, in one of the funniest scenes in the play, confronts his son, not knowing that his sexuality is not nearly advanced as he and Rhona think. He offers to buy Lewis condoms to which he responds, “I’m only 13. Should I be having sex?” In an effort to “bond” with his son, he confesses, “I felt my first breast the day after my Bar Mitzvah,” and gives him a copy of Hustler magazine that backfires later in the play.

But beware, playwright Anderson might have something else up her artistic sleeve other than exploring the mores of sex and nudity, (sans the nudity). Under Lisa Peterson’s highly skilled, spot on direction, she explores the deep relationship that develops between the two women that will eventually result in a betrayal with dire consequences, illuminating, ever so subtly, the issue of class distinction and trust.

James Eckhouse is extremely talented, delivering a highly-polished performance, with each of his characters being distinctly different.

There is a funny moment when Charlotte cautions the audience not to confuse her “John” with Dr. Bloom, “Because the same actor is playing both parts.” Referring to Dr. Howard Bloom, she says to Rhona, “I can see why you married him and can see why you divorced him.”

As far as Polly Draper’s performance, it took a while for her character to begin to emerge, as in the beginning, she was not giving much more than throwaway line readings and fake emotions, especially in her scene with her son. However, as the play progressed, Draper did manage to give a credible performance.

Technically the production is beautifully enhanced by clever set design by Richard Hoover with rear panels that slide up and down for the delivery of set pieces, and is supported by a very interesting light sign by Rand Ryan, who blankets the stage in red (symbolic perhaps) during the multiple, smooth set changes.

This is a pretty perfect, entertaining production and an evening well spent.

By mirrormmg April 24, 2011
in Life and Arts
Related Posts