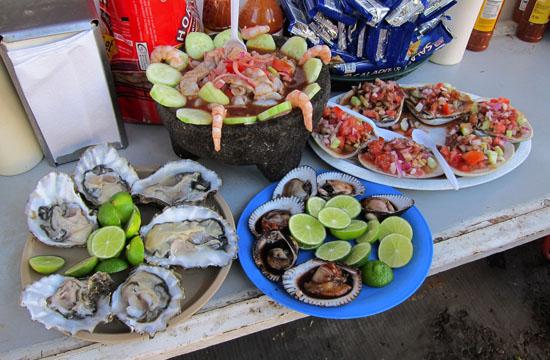 Hot dogs in Copenhagen, noodle carts in Penang, bagel wreaths in Krakow, marlin tacos in Tijuana, herring stands in Amsterdam, blood sausage, and corn on the cob in Bogota – all examples of what’s cooking on streets around the world and what will be the topic of conversation and celebration at the Global Street Food event on Sunday at The Broad Stage in Santa Monica.

In an on-stage discussion, panelists will take a global view as they talk about street food, exploring what it is, how it’s different from eating in restaurants or at home, how it fits into a person’s daily life in different cultures, and its role in the evolution of the food trucks that are roving the streets of Los Angeles.

After the discussion, participants will go outside to sample food from six food trucks: Mariscos Jalisco, Let’s Be Frank, India Jones, Plaggio Gourmet on Wheels, Nom Nom Truck and Crepe’n Around, while listening to Latin/African music from the Masanga Marimba Ensemble.

Kleiman savors not only the deliciousness of street food, but also the rich cultural experience of it — the serendipity of walking down a street, encountering a street vendor who specializes in one food, and seeing how food, community, culture and plaza all come together at the vendor.

“I’ve spent most of my time traveling in Europe, especially Italy and also France, Spain, and Greece to a certain extent. When I first started to travel, it was the best way to eat and not spend much money,” Kleiman said to the Mirror. “Then, later, when you can eat [at the finest restaurants], often times you find that street eating was the more satisfying. A brioche stuffed with ice cream for breakfast, polenta frita or neapolitan pizza — they were all pretty incredible…

“In Los Angeles the food trucks are the closest thing to street food that the powers that be will allow us to have, in addition to the hot dog carts and the fruit carts,” she said. “They’re the same kind of thing — you encounter them, and around them will be a little community of like-minded people who have just sprung up to line up, eat, and talk. There’s serendipity, personal satisfaction, and community.”

This event is a collaboration between Santa Monica College (SMC) Associates, a community-based support group dedicated to enriching the college experience of SMC students, and radio station KCRW, a National Public Radio affiliate based on the college campus.

“When KCRW’s general manager Ruth Seymour left and Jennifer Ferro became the station’s new manager, we invited Jennifer to come and talk with us about her vision for the radio station,” said Judy Neveau, SMC Associates director of community relations. “We decided we wanted to work together, and this is our first major collaborative event. SMC Associates is helping with the underwriting, and KCRW is delivering wonderful content for the event.”

Neveau said the topic of global street food is related to two current themes at Santa Monica College. One theme is food, which is this year’s annual theme chosen by the students, faculty and staff. “Food is pretty central to everything; everything can be discussed through the prism of food,” said Kleiman. “Food takes up petroleum, causes ecological excess, gives us pleasure. I think food is a pretty smart place to examine lots of fields of study, like history, literature, science.”

The second theme at SMC is the ongoing theme of global citizenship, one of the campus’s core beliefs, said Neveau, because “global citizenship is a preparation for our students in the world we’re living in now. This event hits both theme buttons.”

In a month-long prelude to the event, KCRW’s blog (blogs.kcrw.com) is featuring daily posts of global street food photographs submitted by listeners.

Tickets for Global Street Food are sold out at press time, but the event will be covered on these pages in next week’s edition.

By mirrormmg April 29, 2011
in Life and Arts
Related Posts