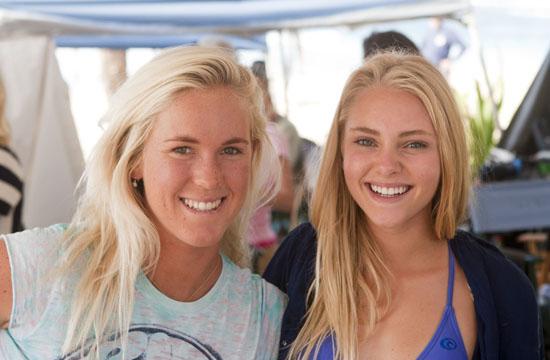 Seventeen-year-old AnnaSophia Robb is no stranger to the big screen. She landed her first major role playing opposite Jeff Daniels in “Because of Winn-Dixie” at age twelve, and has since appeared in “Race To Witch Mountain,” Tim Burton’s “Charlie and the Chocolate Factory,” “Bridge to Terabithia,” and “Sleepwalking.”

An accomplished, competitive gymnast, and award-winning dancer, Robb was likely very well-prepared for her role as Bethany Hamilton in “Soul Surfer,” the compelling true story of a teen surfer who lost her arm in a shark attack and how she overcame her handicap through faith and determination to become a champion surfer.

The following interview took place at a recent press conference and has been edited for print purposes.

How did you get involved with “Soul Surfer?”

Robb: It seems that Bethany and her mom had recommended me for the role. My agent sent me the script and I thought it was an incredible role and was fascinated by all the challenges it offered to play Bethany. I wasn’t familiar with the incident and met with the director after I read it and had a lot of questions. I wondered if this really happened and did she actually do what she did, and he assured me that it was all true.

Did you have an interest in surfing before you did the movie and how did you feel about getting in the water?

Robb: I had taken one surfing lesson before and that doesn’t really count because it was just for two hours, so it was a whole new experience for me and I loved it. I love the ocean and have a passion for surfing now, even though I’m not very good at it. I like getting out there and paddling around. As far as sharks are concerned, they are beautiful animals and just part of the eco system. Attacks don’t happen that often but when they do, a lot of good can come out of them.

Faith played a monumental role in getting you through what could have been a major disaster. Have you always been religious?

Hamilton: I gave my heart to Jesus when I was five-years-old and since then it’s been a special relationship. To me it’s not a religion; it’s just talking to God, reading his word, and doing my best to honor him in everything I do. My belief is where I get my strength. When I’m struggling with something, I can go to him for help and I’m excited to share that.

As a beginner, how did you feel getting up on a board and training with Bethany, who is a champion surfer, and (to Hamilton) how did you help her build confidence and control?

Robb: Bethany taught me a ton of things and we had some fantastic water guys. Her surf coach Russell Lewis and my surf coach Noah Johnson really helped me figure out where the channel is and how to look for waves and what to do. They gave me a general knowledge of the sea and being comfortable in it.

Hamilton: For me I knew that she was only going to have a month to learn what took me six years to learn. My main focus was to show her how to have fun and to be comfortable in the water so that she would look natural when they’re shooting the scenes of her paddling or sitting on the board. Just sitting on a board can be challenging.

Robb: (Laughing) I found that out, but at least now I can sit on a board.

For those kids who live in land-locked areas, could you explain the joy you get from surfing?

Hamilton: It’s really hard to explain unless you’ve tried it, but surfing is very special and unique. It’s being out in the ocean in the sun, the water on your skin, and the adrenalin rush when you catch a wave. You have to be creative so it’s like an art form in a way. You’re out there having fun, but I think it’s something you actually have to try to truly understand it.

Robb: I think her story is really relatable because it’s about facing and overcoming a challenge and going after what you love. Whether it’s surfing or baseball or acting, it’s about something that has been taken away from you, but you’re going for it anyway.

Bethany, could you describe the moment of the attack?

Were you pleased with how the media handled your story?

Hamilton: I thought the media overly dramatized my story and my family and I asked them to tone it down and I think it actually did get toned down. The media can be challenging, but at the same time, without the media, I would not have been able to share my personal story. Often the media can bring beauty and encouragement to people’s lives and you, as media, can look for stories that can make a difference.

Did the movie portray the shark attack accurately?

Hamilton: I love how in the movie that moment is portrayed very spot on with the way it happened. That was one thing I was nervous about because I didn’t want them to make the shark attack into this vicious experience and overly dramatize it. People are really scared of sharks because they’re intimidating, but at the same time I just hope this film doesn’t cause shark phobia that so many people have and that they will just enjoy the ocean. Shark attacks are uncommon and it’s actually more dangerous to drive to the beach than to get in the ocean.

What was your objective in this film and how did you feel about having the Hamiltons on the set during the shoot?

Robb: My main goal for the film was to tell Bethany’s story how she wanted it to be told. I wasn’t going to be happy with the movie if she wasn’t happy with it. We became good friends and I could ask her anything. She always gave me an honest answer and that’s really helpful as an actress. I didn’t know going into this what the experience was going to be like and it couldn’t have been any better. I would text or call her if I had a question and the Hamiltons were always on the set helping me make decisions.

How did your family feel about the movie characters?

Hamilton: My parents were really stoked, especially my dad, because Dennis Quaid was playing him. We all became instant friends and we would do stuff together. Dennis is really hooked on surfing now and that was fun. He was in the ocean whenever he had a chance. My mom had a block in her mind that no one could play her but then when we found Helen (Hunt), my mom said ‘she’s the one.’ Actually, Helen had been surfing for a few years, which really helped.

Are all the other characters based on real people?

Hamilton: The very competitive character of Malina (played by Sonya Balmores Chung, a surfer from Kauai, Hawaii) is fictional, but in professional and amateur surfing you do have competitive rivalries, but in my case, I haven’t had situations where it’s been catty between each other. I didn’t mind that element because I liked how it pulled together in the end and how they wind up being friends. Actually she’s a good friend and I used to compete against her when I was little, so it’s funny how that all worked out.

How did they eliminate your one arm?

Robb: I wore a green sleeve on my arm and then a prosthetic.

As you get older, do you still enjoy acting as much as you did when you were younger?

Robb: If I didn’t get joy from acting, I wouldn’t do it. My passion for acting is growing and I love telling good stories and inspiring stories and helping to give a little happiness to the world and perhaps get the audience to think about different issues. It’s such an interesting, powerful medium to work with because so many people pay attention to it. I love the community in it and the people I get to meet along the way. But I’m definitely going to college.

What would you like the audience to take home with them?

Hamilton: Hopefully to enjoy the film and enjoy the surfing, which is so beautiful. Not a lot of people know that much about that sport so they can be educated. But most of all, I hope people can find inspiration to push through those hard times.

By mirrormmg April 29, 2011
in Life and Arts
Related Posts