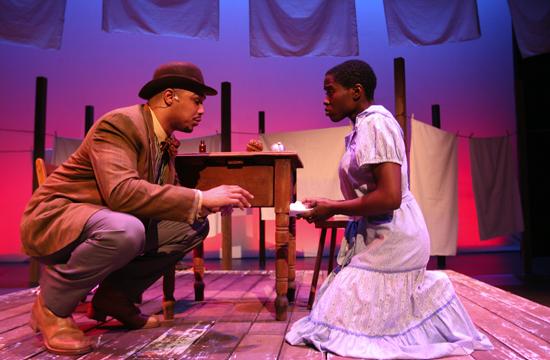 Toni Morrison’s “The Bluest Eye” stands with American greats such as “The Color Purple” and Maya Angelou’s books as a riveting account of an African-American childhood in the South. It offers less optimism however; painting a grim picture of the effects of racism and low self-esteem. Adapted by Lydia R. Diamond as a stage play originally commissioned for Chicago’s Steppenwolf Theatre Company, “The Bluest Eye” has been banned in some portions of the country for its frankness.

The current production by Phantom Projects Theatre Group at the Miles Playhouse is a fine mounting of this story. It’s too bad that it has to compete at this time of year with happy Easter and spring break entertainment, for it requires an audience that is patient and sensitive.

Adopting the novel’s technique of using one character’s viewpoint, the play is narrated mostly by a girl named Claudia (Tekquiree Spencer), along with her sister Frieda (Tiffany Danielle). Their family is poor but at least they have two parents and live in a house. They take in a temporary guest, Pecola (Sola Bamis), a lonely, homely, lost-in-a-dream child whose parents (Willie Mack Daniels and Shamika Franklin) fight constantly. The three girls become friends although the sisters often make fun of Pecola’s eccentricities-she is obsessed with a fantasy about becoming white and longs for blue eyes. The children take note of the seasons, the plants, the feuds and family backgrounds of their parents, the development of adult sexuality, and racial issues.

Diamond’s adaptation is very literary-there are lengthy sections of narrative by the girls and by other characters that are reminiscent of the role of a Greek Chorus. Pecola at one point even has a Greek tragedy-like interchange with her soul (Danika Butler) about the “bluest eyes” that she believes she has obtained from a charlatan fortune teller. Director Janet Miller, obviously aware of the talky nature of the text, has livened the play with pantomimed sequences and characters appearing in silhouette, creating a cinematic effect that enhances flashbacks and works well for a couple of explicit scenes.

Most interesting is that the three major characters, the young girls, are played by adults (Bamis is in Cal Arts’ Master of Fine Arts acting program) but manage to look and act the part of 11-year olds, wearing overly long worn dresses and ankle socks. Bamis is convincing as the insecure Pecola, whose misplaced values are scorned by the more assertive Claudia. Franklin, as Pecola’s mother “Mrs. Breedlove,” attains a quiet dignity in a scene where she scrubs a floor while recalling the difficulty of birthing Pecola. Daniels brings multiple dimensions to his challenging role as Pecola’s father Cholly.

There are moments of humor in “The Bluest Eye,” especially in scenes with the young girls as they try to understand the attitudes and behavior of adults. But the overall tone is one of sadness. Unlike Angelou’s and Walker’s novels, which take us through the lives of their heroines to adulthood and self-realization, this 90-minute play ends with a brutal act, one character’s madness, and no satisfying resolution, This is a more educational kind of theatre experience that will not be for everyone but it should be seen if possible.

By mirrormmg April 20, 2011
in Life and Arts
Related Posts