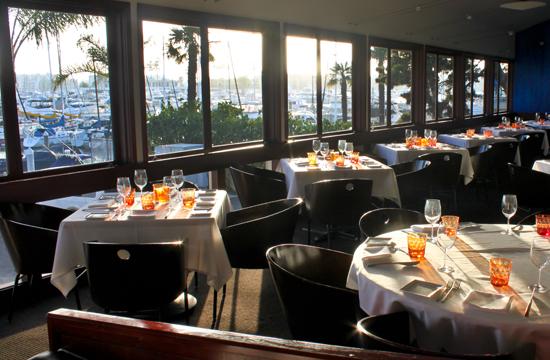 Cafe del Rey, a lovely, airy, newly redecorated dockside restaurant, opened its doors in 1969 in Marina del Rey and over the years customer reviews have been mixed, ranging from excellently, to mediocre, to poor. The overriding complaints centered around the Pacific Rim or Asian Fusion cuisine which served up small, pricey portions with some negative comments on the erratic service.

For those of you who may have had less-than-fulfilling dining experiences there, be on notice that the new Executive Chef, Daniel Roberts, working closely with his Chefs de Cuisine Atsushi Takatsuki and Michelle Lainez, has totally redesigned the menu, incorporating some of his favorite culinary styles, and created a variety of sumptuous Mediterranean-inspired, California cuisine. The new mouthwatering dishes are elegantly prepared and beautifully presented by a dedicated, friendly wait staff. The fare is not only seasonal but changes daily and includes the freshest catch.

After experiencing a delicious tasting put together by Chef Roberts, the Mirror sat down with him for an interview and the following text has been edited for print purposes.

When did you start at Café del Rey?

Roberts: I arrived over five months ago. Management wanted to know what I thought of a Mediterranean theme. I said that the restaurant is situated in an affluent port and when I think of affluent ports in the Mediterranean, I think of French Riveria – Nice and Cannes, and other cities such as Barcelona and Florence. There are about nine countries on the coast of the Mediterranean but I didn’t want us to be one specific type of a restaurant – Moroccan or Greek or Turkish but I wanted to use those cuisines as influences, incorporating some of their spices, but gearing ourselves more towards a French Riviera theme.

What was management’s reaction to your vision?

Roberts: They thought it was a positive way to go with the restaurant and after a tasting, which they enjoyed, I met with a whole bunch of people in management, including some other executive chefs, and I got the job.

What did you serve at the tasting for the executives?

Roberts: I did a tuna tartare picadillo style with black currants, toasted almonds, and coconut, dressed with a light wine vinaigrette. I also did a Falafel Salad with flatbread, organic baby lettuces, paprika flatbread, marinated pickled cucumber and tahini. (on the menu $12). I’m from New York originally, and growing up in a Jewish neighborhood in Queens, I know about falafels. I gave some thought on how to put a different spin on it. In a conventional falafel, the garbanzo beans are soaked overnight and then they’re drained, dried, and ground up. I used a different garbanzo bean that gave a smoother texture so that when I fried the falafels, they were crisp on the outside and softer on the inside. A lot of flavors go into a falafel – onions, garlic, cilantro, cumin, and coriander. I also prepared a Duo of Sonoma Lamb (on the menu – $36) that was an apricot braised lamb shank, goat cheese crusted lamb loin, broccolini, and boulanger potato.

Where did you train?

Roberts: I didn’t go to school to be a chef. I trained throughout New York and got my training on the job over the last 19 years. I was actually studying to be an architect but, in some respects, being a chef you are an architect. After a year in school, even though I was doing well in my courses, I just wasn’t scholastically oriented to go through nine years of schooling to become an architect.

So what made you decide to become a chef?

Roberts: My mother kind of put it to me. She said either go to school or get a job. I come from a big Italian family and cooking was always part of our lifestyle so my first culinary position was swinging pizza in Sbarro’s in Times Square. From there I went to a seafood restaurant in Queens where I started as a dishwasher and worked my way up the “food chain.” After that I worked in a jazz supper club in Manhattan where I got to sauté and grill and worked my way through various other restaurants in New York City getting different experience in different concepts and cuisines. I was quite ambitious and wanted that other guy’s job and that passion and drive has driven my career.

What was your first job in California?

Roberts: My first job was in 1999 at Joe’s in Venice where I worked with Joe Miller, a very talented chef. I was only there about four months when an opportunity came my way to work with Levy Restaurants who were prominent in Dodger Stadium and Staples Center. A buddy of mine became an Executive Sous Chef with the company and he brought me on. Within the first year I was over at Staples Center and then did one summer at Dodger Stadium. My talent and drive to take over became very evident and I was made a Sous Chef and left four years later as the Senior Sous Chef. I went on to Asia de Cuba at the Mondrian Hotel as their Executive Sous Chef for a year and then was promoted to Executive Chef.

Did any of the dishes you’ve created come out of your childhood?

Roberts: I think making fresh pasta with my grandmother on Sundays on a big wooden block on the kitchen table and the fresh tomato sauce influenced me to the extent that I believe that it’s better to make our own ingredients in house wherever possible, so we make our own pasta, gravlax salmon, mozzarella, ricotta cheese, and focaccia, as well as all of our stocks, sauces, and desserts. A lot of restaurants in town will outsource things and while there’s nothing wrong with that if you’re buying a good product, I like that we have house-made products as much as possible.

Do you shop the local Farmers Markets?

Roberts: I’ve been really busy since I came on board and haven’t as yet, but I do buy from vendors who source food from local farms. But going into the spring and summer menus, I have a list of all the markets in the South Bay area which I hope to be able to check out. But honestly, it’s really hard for me to break away from the restaurant.

How many people are in the kitchen?

Roberts: I have two Chefs de Cuisine and myself which makes up the chef team and on average we’re looking at about six guys total – including four on the hot line, pantry, and pastry most of whom were here when I arrived. I encourage my staff to come up with ideas for new dishes because I don’t want to just dictate what we offer on the menu. I want my people to feel they have a vested interest and pride in what we do.

What do you like about this property versus other properties at which you’ve worked?

Roberts: What I like about this property is that it’s not a hotel and I can just focus on the restaurant – the food and making personal connections with our guests. I enjoy coming out of the kitchen and going around to the different tables to say hello and get to know the regulars. Café del Rey has been a brand for a long time and I want to help elevate it so that people know that we are not just a special occasion destination, which is how I think we were viewed before I got here. People thought of it as a high-end, fine dining restaurant and a place you take someone whom you want to impress. But really, we’re an every day dining destination. Our menu is now fairly priced and we offer half portions on our starters and salads so that we can make our food more affordable ($6 – $10).

Thank you for a most interesting interview and best of luck to you.

Roberts: It’s been very enjoyable and I’m glad you had a good dining experience.

In addition to the splendid menu, the restaurant offers an extensive selection of wines from all parts of the globe which you can sip as you let your eyes feast on the stunning Marina del Rey harbor with boats and yachts of all sizes anchored right in front of you. At night, with all the flickering lights surrounding the harbor, the restaurant is transformed into a most enchanting setting, perfect for any occasion.

By mirrormmg April 3, 2011
in Life and Arts
Related Posts