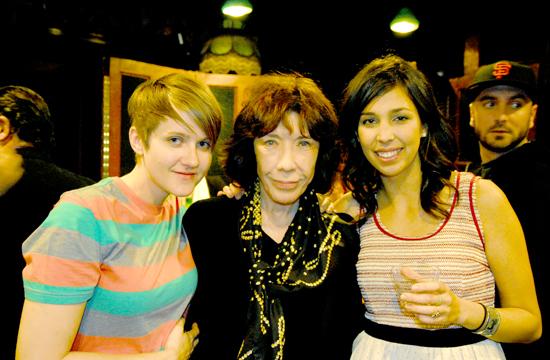 Seriously, folks, it was a funny show. It began with a chat between Carlie (last name Mantilla-yes, like the lace veil), wearing a dress and carrying a guitar, and Doni (last name Carley!) in slacks and a horizontally striped shirt. Carlie mused, “What was that movie where Tom Cruise has cancer and he likes opera and Samuel L. Jackson is also in it?”

“It’s called ‘Philadelphia,’ ” Doni explained to her. “And it’s Tom Hanks and Denzel Washington and it has nothing to do with cancer or opera.”

A few minutes later, Carlie was synopsizing a sitcom for Doni, who rolled her eyes and exclaimed: “She can’t remember who’s in “Philadelphia” but she remembers an entire episode of “Full House!’ ”

Carlie and Doni’s act alternated banter and anecdotes with wacky acoustic -guitar songs. Both the comedy and the songs were often risqué, dealing hilariously with below-the-belt subjects. The twosome also riffed on their orientations (Doni is a lesbian; Carlie is heterosexual with a preference for “guys with accents- I don’t date Americans”); their survival struggle (at one point in the show, the lights went off and Carlie paid her electric bill over the phone and the lights went back on); their odd jobs; and the constancy of their friendship.

Santa Monica Playhouse co-director Evelyn Rudie did a walk-on as Carlie and Doni’s hair-curler wearing landlady, asking them to “keep down the noise.”

The duo alluded to their original meeting. They were students at Los Angeles Community College Theatre Academy in 2005. They didn’t like it and dropped out together. Moving in as roommates, Carlie and Doni found themselves writing silly songs and comedy routines, which led to the development of an act. Carlie’s mother convinced the duo to sign up for an open mic at the Comedy Store in 2007.

Lily Tomlin, the famed comedian and actor whose career spans “Rowan and Martin’s Laugh-In” in the early 1970s to stage shows, films, and a Mark Twain Award for humor, met Carlie and Doni through their manager Rocco Urbisci, with whom Tomlin had collaborated in the past. Tomlin told the young women that she knew Rudie, who had gained fame as a child performer in the 1950s TV show “Eloise.” That led to the idea for “Carlie and Doni Help Save the Playhouse.”

Addressing the audience at the start of the show, Tomlin stated “I can assume you are here because you know how important this little theatre is-and also to see these young women. Jane Wagner (Tomlin’s partner) and I think they’re very special.”

She added that, growing up in the Detroit area in a working-class family, she did not attend theatre as a child but did stage plays on the family’s front porch. “Santa Monica Playhouse reminds me of that porch.”

After the show, Tomlin, Carlie, and Doni greeted friends and fans at a reception that was as down-home as a party in someone’s back yard.

The Playhouse has been in operation for 50 years and has been under the direction of Rudie and her husband Chris DeCarlo since 1973. Adult and children’s productions alike have won numerous awards and the theatre also offers acting classes and field trips.

Benefits such as “Carlie and Doni” are held several times a year. “The benefits have been instrumental in keeping the playhouse open,” Rudie said.

Anyone who wants to donate to the Santa Monica Playhouse can go to the web site www. santamonicaplayhouse.com and click on the “Donate Now” button, or donate by credit card, calling 310.394.9779 extension 623.

By mirrormmg April 17, 2011
in Life and Arts
Related Posts