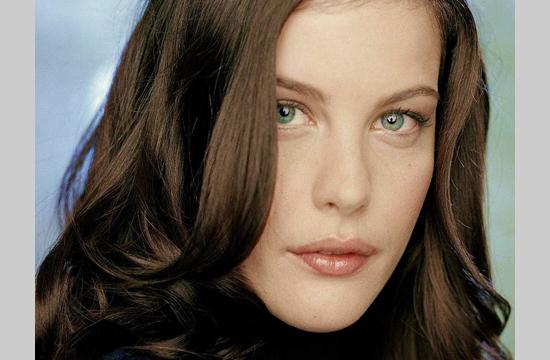 Liv Tyler is no stranger to the big screen – having established herself as a talented actress as an Arwen, a half-elven, in “The Lord of the Rings” trilogy that catapulted her into international stardom. She grew up in the shadow of the rock ‘N’ roll explosion thinking that her dad was Todd Rundgren, but at age nine discovered that her dad was the very explosive, and troubled, Steven Tyler of Aerosmith. They have since developed a close relationship and have worked together professionally. In addition to her acting career, she has served as a United Nations Children Fund Goodwill Ambassador since 2003 and is a one of the faces for Givenchy’s beauty products.

Tyler’s latest role in, James Gunn’s “Super,” is that of the drug addict ex-wife of the protagonist (known as The Crimson Bolt) played by Rainn Wilson. She is lured away by a bad – guy drug dealer, played by Kevin Bacon, who keeps her stoned all the time. (Gunn and Wilson’s interview appeared in the April 8 edition of the “Santa Monica Mirror” and is also available online.)

Tyler participated in a recent press conference, and the following interview has been edited for print purposes.

Congratulations on developing a most compelling, perhaps the only non-cartoonish, character in the film. What was your experience like in making this film?

Tyler: There were many different elements. I would say that the first part was how quickly we shot. We shot in 24 days. I’ve made a lot of independent films in my career, but this one was quite intense because we were rushed all the time. We only got to do a couple of takes and then it was over. But, I really loved the script and all the characters. Some of it was very funny and made me laugh out loud, but there was also such a heart to the story because it showed how flawed these people are.

This was especially true of my relationship with Frank (Rainn Wilson) and my character of Sarah, his ex-wife, who he is determined to win back. These two unlikely people come together and find a heart connection that sort of makes them happy. I was also intrigued by the addiction element because in my lifetime, I’ve had friends and family members that have suffered from or do suffer from the disease of addiction.

When you read the script, what jumped out at you?

Tyler: The part matters a lot, but it’s never just about me. It’s about the story. You can tell when you start reading a script whether or not it’s compelling and if you care about all the characters. I don’t remember one specific thing about Sarah that made me want to do the role, but I do remember reading it, loving it, and not wanting to put the script down. I wanted to have a meeting to say “let’s go.” Rainn and Ellen (Page) were already attached and I liked James’ (director) other films.

What kind of films did you like when you were a child?

Tyler: As much as I’m a film person and have been in a lot of serious dramatic pieces with amazing film makers, when I was growing up, my mother and I were obsessed with the most weird, campy horror movies so my film upbringing was sort of tongue-in-cheek, which this movie is to some extent, as well.

Tyler: The thing that really impressed me is that he’s a sweetheart. He’s very talented and funny and just lovely to be around. He’s a good leader and what makes an incredible director is the ability to lead and guide everyone. I’ve made other small films and if the director doesn’t know what he wants, it’s really destabilizing. You have to feel like the director is your rock and knows exactly what is needed from you.

Did you have to make any adjustments in working with James?

Tyler: It was a little hard for me on our first day because we shot all six or seven little flashbacks with my husband in one or two takes, which was almost half my part. They included shots of us getting married, being in bed, having a fight, gardening, our three children, and an AA meeting. James knew exactly what he wanted, but it was scary for me because I wanted to have more time. That said, I really trusted that he would get what he needed.

Did you know your co-stars before?

Tyler: I think I had met Kevin Bacon and Ellen before, but I don’t think I ever met Rainn.

How did you keep your sanity doing over 50 set ups a day?

Tyler: We’re all professional, hard working people. I kept to myself and did my homework. I was prepared so when it was my turn to do my part, I was ready. My character is sad and wounded and out of it half the time so I would come to work, freshly showered and all bright eyed and bushy tailed drinking my carrot and cucumber juice and suddenly would have to be nodding out on heroin. I would have little sips of whiskey throughout the day, which helped.

Going off topic for a moment, how do you feel about your dad being on “American Idol?”

Tyler: It’s very exciting. I always want to have a party and cook dinner and sit on the couch with my friends and eat popcorn while we’re watching him. I feel really happy for him and it’s interesting to have the man I’ve known almost my whole life as my father be all those things you see him being on television. It’s so funny to have people coming up to me saying that my dad is touching them in some way. That part is quite interesting for me because they’re getting to know him for the first time. I guess that’s what happens when you’re on television.

Do you think he’s doing a good job?

Tyler: I think he’s doing an amazing job. I’m really proud of him. As a family, we’ve had a few rough years because he’s gone through a lot, but he’s been really brave and is in high spirits. He’s a wonderful musician and loves his music more than anything in the world, but I think that having this opportunity of doing something totally new at his age must be thrilling and a new awakening for him. There was a beautiful article in the New York Times about how much he was affecting people and it really made me cry.

Do you have any fears as an actor?

Tyler: Yes (laughs). I have all sorts of fears as a person and as an actor, but you know it’s because I don’t come from a family of actors or an actor’s world. I didn’t go to acting school and didn’t study plays in high school. I have no formal training whatsoever. I’ve taught myself and it’s all internal for me. Some actors seem like natural performers, but it’s hard for me and I’m not quite sure how to articulate it. Sometimes I’m so scared, I feel like I’m going to black out, but something takes over and it just happens and I function.

How does being a spokesperson for Givenchy fit into your life?

Tyler: It’s been amazing for me. My son is six and I really wanted to be there for him as his mother, so having that relationship with Givenchy enables me to make a living doing something I really enjoy. I get to go to Paris often and travel to beautiful places all over the world to meet with editors and do shoots. Sometimes I feel like the Avon lady. This really works well for my life because it’s for shorter periods of time, usually a week or two, unlike a film that could take me away for months.

Has you life unfolded they way you wanted?

Tyler: I’m really very happy and am grateful for everything in my life.

By mirrormmg April 15, 2011
in Life and Arts
Related Posts