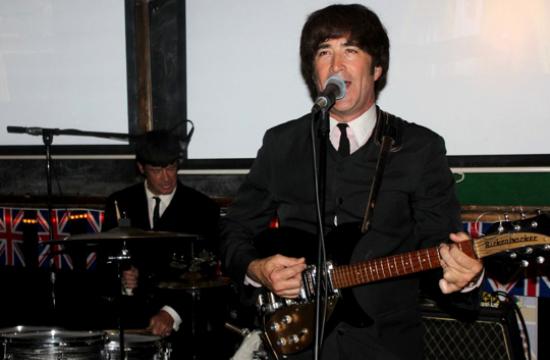 An estimated 2 billion people around the world watched as William and Kate took their vows last Thursday, April 28. But few cities had the chance to get as authentic a feel for what London pubs might actually be like on the big night as Santa Monica. With a British expat population of over 5,000, Santa Monica boasts several English businesses, many of which held special events for the wedding.

Ye Olde King’s Head took the cake on Friday night with its royal festivities, bringing in the Beatles, champagne and William and Kate themselves (in cardboard form). The pub was decked out in British flags, balloons, flowers and photos of the royal couple. Employees and guests alike donned monarchial attire, and at 8 p.m. a Beatles cover band really got the already-jovial crowd moving.

Yorkshire native and 35-year manager of Ye Olde King’s Head, John Gordon, hosted an almost identical event in 1981 for Princess Diana’s wedding. “Everybody likes this kind of thing,” he said. After scanning the room tiara laden room, he predicted that William and Kate’s wedding brought just as large a crowd. “People are really interested in it . . . It’s a nice change, a nice little boost in England. There will be lots of street parties . . . all the pubs will be like this.”

In regards to the large British expat population in Santa Monica, Gordon, who has lived in the area for 38 years, says it all has to do with what the English call the “seaside weather.” “It’s never too hot, never too cold . . . It’s the perfect weather for English people,” he said. Gordon believes that the influx of the British to the Pacific coast tapered off after September 11 when immigration laws tightened, but says a lot of people still migrate to the Santa Monica area from England.

Victoria Castillo has been bringing family and friends to Ye Olde King’s Head for over 17 years. She describes the pub, one of the first ones she ever visited, as a familiar, comfortable place. The only place, in fact, that she would consider watching the wedding.

Decked out in a large white hat, reminiscent of those worn by guests of the wedding, Castillo started watching the wedding at noon for lunch at the King’s Head. “And its still going on and its quite late now,” Castillo said. “I’ve seen it about five times and I love it every time, it’s beautiful.” Chuck Berez, decked out in a festive Beatle’s T-shirt, agreed that it was a special night to spend at the King’s Head, but joked that, “Now we’re waiting for the Monty Python spoof of the wedding to come out.”

Berez’ sarcasm holds true with English natives Alex Gotch, Lloyd Seymour, David Polley and Alex Bell who were visiting Santa Monica “over holiday” on Friday night. They explained that the media has given immense coverage to the event. “It’s been hyped up beyond belief,” Gotch said. “Most people probably don’t even know where William is in the heir to the throne . . . everyone’s jumping on the bandwagon.”

The four, from Essex, just outside of London, were actually flying when the wedding was taking place, but didn’t seem to mind missing it. “I’d much rather be in Santa Monica chilling out than at home in London watching the royal wedding,” Powley said. “And it’s great to have a day off work,” Bell added.

The four claim to have no interest in the wedding, and say they only stepped in because they are staying close by. ”We saw it was an English pub so we thought we’d have it a quick look in,” Gotch said. Bell explained that for most in England the wedding is just an excuse for a social occasion to get together, but not necessarily to actually watch the wedding.

By mirrormmg April 30, 2011
in Life and Arts
Related Posts