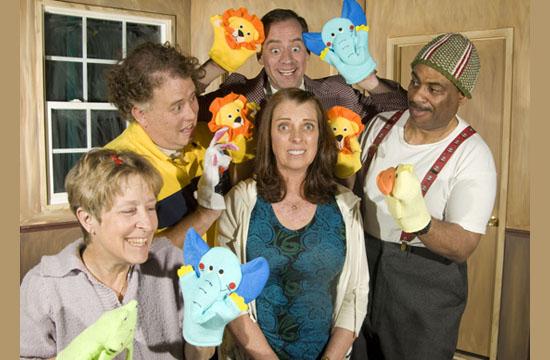 Tom Griffin’s poignant “The Boys Next Door,” a revival on stage at the Santa Monica Promenade Playhouse, is the story of four mentally challenged men who live together in a shared apartment and how they interact with the world around them. In the hands of a lesser director, the production could have easily become an exercise in portraying stereotypes in a syrupy, judgmental way. However, under the powerful direction of Tony Torrisi, who assembled a top-notch cast, the production is a delicate, sometimes comedic peek inside the bodies, minds, and psyches of distinctly different believable characters.

The first character we meet is Arnold, brilliantly played by Richard Sabine. He has just returned from the supermarket where he bought nine boxes of Wheaties, heads of lettuce, and a bag of Charcoal Briquettes and frantically tries to figure out exactly what he’s purchased, removing items from the multiple bags over and over again. Sabine, as well as the rest of the ensemble, has done a splendid job in developing a strong physical life and when he breaks the fourth wall, he delivers his dialogue with razor-sharp comic timing and facial gestures that convey a thousand words. He could be considered somewhat of a pain, but lurking beneath his complaints, threats, and outbursts, we know he is really made of putty. He works as an usher in a movie theatre and is intimated by one of his co-workers into polishing his shoes. Good comedic touch as the shoes grow in size throughout the play. If he receives any criticism, Arnold threatens to take a train to Russia. He also takes everything literally such as one of his roommates telling him to hold his horses to which he replies with deep sincerity “I don’t have any horses.”

Tony Stafford’s beautifully developed Lucien will both delight you and break your heart. He is the most handicapped of the group and operates pretty much like a five-year-old. He repeats his words and phrases numerous times and almost hops around instead of walking. His roommates are patient with him as they are with each other, most of the time. There is one particularly heartbreaking moment where Lucien is being interviewed by a state official to determine his mental status. When asked a question, Lucien sings the alphabet song, incorrectly but becomes very lucid when discussing his roommates. In a startling transition, Stafford breaks character and pierces the fourth wall as he talks to the audience about Lucien’s disability. It’s a tribute to Stafford’s performance that it took a moment to realize that this mature, articulate actor standing before you is playing Lucien.

The character of Norman Bulansky, played wonderfully by Max Cabot, is lovable and adorable. He works part-time in a donut shop and wears a huge ring of keys that don’t seem to unlock anything. Norman has a deep sense of fair play and follows the schedule of tasks posted by Jack, the social worker who takes care of them. He is annoyed at Barry, the “golf pro” who is shirking his dishwashing duties telling him, “I don’t speak to people who don’t do dishes.” In another noisy scene, Norman blurts out “It’s so loud in here, I need sunglasses.”

Jack, skillfully played by Catherine Shultz, delivers a warm, multi-layered characterization that reveals both her love for these men as well as her growing frustration and weariness with the constant challenge of being patient and understanding in their topsy-turvy world.

Barry Klemper, strongly played by Timothy Sands, appears on the surface to be the most well adjusted, but is actually a schizophrenic who fancies himself an ace marketing person. He “teaches” golf, but is annoyed when his clients insist on a golfing tip. It is appears that he had a pretty violent childhood and a dad, the one-arm Mr. Klemper, administered numerous beatings. Sands’ character goes through the most traumatic transition and is catastrophically impacted by a visit from his creepy, vulgar, ignorant father, played with just the right amount of sleaze by Oh Rhyne. In a very short scene between father and son, Rhyne terrifyingly captures the many aspects of his character and from the moment Mr. Klemper enters his son’s living room, there is an undercurrent of a potential volcanic eruption that culminates in his hitting the terrified Barry and walking out.

The rest of this talented ensemble includes Donna Moore who plays the most delightfully innocent Sheila. She and Norman have a thing for each other and it is played out in two particularly charming scenes – one where they are dancing and the other when she comes to visit Norman in his “digs.” She covets his keys that he holds on to for dear life, but Norman surprises her with a gift of a small ring of keys that Arnold has stolen from the theatre. She is overjoyed and says, “This is the best gift I’ve ever received.”

Rounding out the company is Tony DeCarlo who does an excellent job in his multiple roles, endowing each character with individuality, and Jan Morris, who likewise develops three distinctly different characters, each transformed physically and vocally.

This is an excellent production and thanks to Torrisi’s marvelous direction, it’s a play well worth seeing as it calls attention to the fact, in a most amusing, caring way, that these challenged individuals should not be society’s discards, but people who function well in their individual worlds.

This sweet story will leave you smiling with tears in your eyes.

By mirrormmg April 3, 2011
in Life and Arts
Related Posts