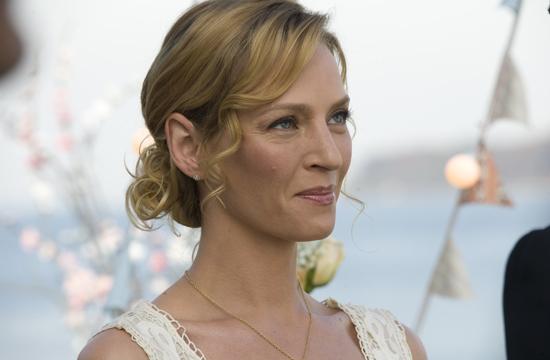 She may have made a name for herself starring in some of Quentin Tarantino’s finest work such as “Pulp Fiction” and the “Kill Bill” series, but Uma Thurman’s true Hollywood calling is her ability to identify and work with some of the freshest and coolest filmmakers in Hollywood.

In collaborating with the likes of Terry Gilliam, Phil Joanou, Bruce Robinson, Mira Nair, Katherine Dieckmann, and Roland Joffé, Thurman has sniffed out yet another cinematic gem in Max Winkler’s “Ceremony,” which opens the weekend of April 9.

“This film fits in an area that I am very proud of, which is, you know, stumbling upon (and) being able to identify strong, independent, new writing,” Thurman said. “I just read the script and I thought it was brilliantly written. I couldn’t believe it was a first-time filmmaker”

Indeed, Winkler developed quite an intriguing love story about a young man who adamantly pushes hard to reclaim the woman he loves (played by Thurman) on the very weekend she plans to marry someone else.

In fighting off an old flame (who is in over his head) while also pushing forward with a marriage that seemingly makes the most sense for her, Thurman’s character, Zoe, is one of a diverse group of quirky characters who are intrinsically different yet a calculated balance to create an unexpectedly fine film.

“I thought the dinner party scene was just masterful. The way the interpersonal relationships ping-pong back and forth around that table is, I would think, something you would see in the work of someone older than (film director) Max (Winkler),” Thurman explained. “It’s really sophisticated and really smart.”

In fact, Thurman believes the level of sophistication of “Ceremony” is so high it ranks high in the independent cinema space, but also separates itself from any film in general trying to corner the mature young adult market.

“I think the film is moving. I think the film is funny. I think the film is wonderfully open-minded and open-hearted and a little sad, in a touching way,” Thurman said. “I think it’s a cool young person’s film that is really grown-up. It’s a really neat hybrid. It’s not some popcorny film made for young people, it’s an intelligent film … about the difficult rite of passage of falling in love.”

The “L” word is a concept “Ceremony” does not necessarily try to define but instead offers a unique perspective of how two people who appear to be the ultimate mismatch may instead be the perfect representation of an imperfect emotion.

“The whole concept of the movie (is) the idea that a young man has fallen in love with an unattainable, older woman who is trying to make a commitment, trying to move forward in her life, trying to be with someone appropriate for her. This young man, full of love, can’t let go. He can’t accept it,” Thurman pointed out. “I think their journey together changes both of them inalterably, and I think love may hurt a lot, but it always improves a person. Love is never easy. It’s not a straight path. Sometimes it is for the very few and lucky, but not for many.”

Fortunately, “Ceremony” is not meant to be watched by the few and lucky. Quite the contrary, this cute independent film, which also stars Michael Angarano, Lee Pace, Rebecca Mader, and Reece Thompson, should indeed be watched by many.

Directed by Winkler and distributed by Magnolia Pictures, “Ceremony” opens locally on April 8.

By mirrormmg April 8, 2011
in Life and Arts
Related Posts