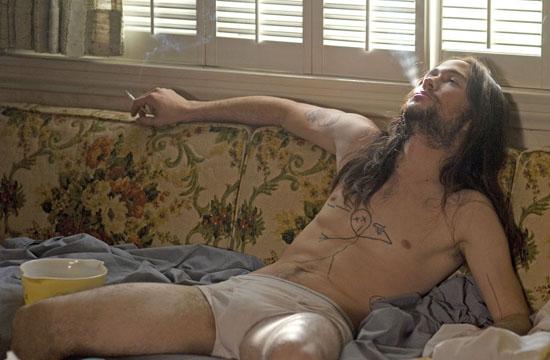 Joseph Gordon-Levitt has been in show business since he was three, and has gracefully transitioned from child star to young leading man. Audiences first became familiar with him when he played young Norman in Robert Redford’s “A River Runs Through It,” and later in the long-running “3rd Rock from the Sun” television series. The actor has been selective in choosing roles, gravitating toward small, independent films like “Brick.” His performance as the love-struck young man in the indie “(500) Days of Summer” resulted in a Spirit Award nomination for Best Lead Male. In his latest film, “Hesher,” directed by Spencer Susser, Levitt plays an almost sociopathic, violent drifter who intrudes himself into the lives of a family struggling to overcome a recent loss. We are to believe that he is there to lead them down the path of recovery through his anti-social behavior. The cast includes the brilliant Piper Laurie as the grandmother, (co-starred with Paul Newman in “The Hustler”) Rainn Wilson as Paul, the grieving husband, Devin Brochu as TJ, the 13-year-old son, and Natalie Portman as Nicole, the object of TJ’s affection.

Gordon-Levitt recently sat down with a group of journalists to discuss a variety of subjects and the following interview has been edited for print purposes.

What attracted you to this rather unpleasant character?

Gordon-Levitt: What attracted me initially to the character is that on the surface he’s a really fun, raucous guy, but what really got me is what’s underneath that. There are a lot of layers to his humanity and wisdom that you don’t necessarily see right off the bat. A lot of movies that have a strong, broad, central character will stick with their one little bit and do it over and over again, which is funny at first, but can get old after fifteen minutes. But Hesher really develops and grows and evolves beyond what you see on the surface. That’s what kept it interesting for me.

How was it working with Natalie Portman, who is also one of the producers?

Gordon-Levitt: It was really exciting working with Natalie. I’ve admired her since she was a very young actor whom I found inspiring because I was a young actor as well. It’s easy to put a beautiful actress like Natalie in a pigeonhole, but she shatters that box all the time because she approaches her work with such dignity and intelligence. She’s not about being a pretty girl, but about being an actor and an artist. The fact that she was producing this movie made it all the more interesting to me because she could produce some huge Hollywood moneymaker, but decided that this was a genuine story and something she cared about and wanted to help get it made.

Piper Laurie is a Hollywood legend. How was it working with her in the “bong” scene?

Gordon-Levitt: It was really cool working with Piper. She was game, as a good actress would be, and wanted to do it right, and she did. It would have been easy to turn that scene into a silly joke. ‘Oh look, the grandmother is smoking the bong, ha ha,’ but the director and Piper found a way of balancing the humor with grounded reality and it became a sweet scene with two people smoking. Is it funny? Yes, but it’s not like it would be in a comedy sketch and that’s what makes it all the more touching and funny.

Is there a freedom in playing a character that has a total disrespect for socially acceptable behavior?

Gordon-Levitt: Absolutely. I think freedom is a good word to describe Hesher. He’s really let go of a lot of the baggage that we all, in this culture, carry around with us, like our attachment to material things, our attachment to our future and our past. He’s just in the present – be here now. I found it illuminating to spend time in that space.

Did you and Spencer develop a back-story?

Gordon-Levitt: Yes. Spencer and I talked a lot about where Hesher came from, what he was like when he was a kid, etc. But, it’s also quite intentional that none of that information is in the movie, but is part of his mysterious power.

You have a great monologue in this film. As an actor do you like these kinds of showy pieces and is it easy for you?

Gordon-Levitt: (Laughs) None of it is easy. Not that I would complain, but it’s hard work to make a movie. That said, it comes down to the writing. If a big speech is well written, you don’t have to think of it as memorizing words because if you know the story, it makes sense.

Did you create your character after someone specific?

Gordon-Levitt: I’m glad you asked that. When Spencer and I talked about the character, we both thought that Cliff Burton, who played bass guitar with Metallica, would be a great inspiration for creating Hesher, both esthetically on how he looked, and also his spirit. Spencer cut a version of the movie that used Metallica’s music and we figured that it was nice to have it in the temporary cut, but thought they’d never let us use their music. We showed them the movie, which they dug, and they decided to give us their tunes, which rarely happens. It was such an honor that these guys, whose work largely inspired our movie, ended up connecting to it and that the movie resonated enough with them that they were willing to lend their work to it. That was a huge salute and meant a great deal to me.

How much character direction did you get?

Gordon-Levitt: Spencer was really focused on the character not being a stereotype even though on the surface he comes off as a homeless, dirty bum. He was really intent on the character being more than that and throwing people off guard by things happening in an unexpected way. Even though it’s the story of a family getting over a terrible loss, it’s not approached in a totally serious way and balances humor with seriousness.

You have some pretty brutal scenes with young TJ (Devon Brochu.) Did you ever feel badly about the way Hesher treated him?

Gordon-Levitt: No (laughs). Devon is a great actor. A lot of people have the misperception that kids aren’t capable of the same thing as adults are and I couldn’t disagree more. I think they are capable of being as good, if not better actors than adults, and Devon is a shining example of that. I’m proud to be in his first movie and I think he has a great career ahead of him.

Were there any challenges in working with a first-time director?

Gordon-Levitt: No. Every director is a unique experience. Spencer made a short film that I liked called “I Love Sarah Jane” and he’s shot a lot of stuff, including music videos and did second unit directing, if I’m not mistaken, on the “Star Wars” movies, which is where he and Natalie met. I like working with first-time directors and have had a lot of good luck with them. Marc Webb of “(500) Days of Summer,” and Rian Johnson who made “Brick,” were first-time directors. If people are ready and good, I don’t see any reason not to work with them. Whether you’re making huge blockbusters or little independent films, the purity of intention is what attracts me to working with a filmmaker.

What advice would you give to a young person embarking on an acting career?

Gordon-Levitt: The important thing is if you love movies, telling stories, and acting then focus on that and don’t be distracted by the ancillary stuff that goes along with show business. What I really love is the work itself. So somebody who wanted to start, whether they’re young or old, I would say just do it and don’t wait around for some Hollywood producer to hire you. We live in the Internet age so don’t worry about the other things. Just focus on the project and get it out there.

Can you talk about hitRECord.org?

Gordon-Levitt: Thanks for asking. hitRECord.org is my production company and I’m lucky enough as an actor to have enough sway in the world to get projects off the ground, instead of just working as an actor for hire. The idea of hitRECord.org is, rather than just working within the insular Hollywood industry, to create projects and invite people to contribute. It opens the door to artists, whether it’s kids working on their laptops in their parent’s house or professionals working in their home studios. Anybody can contribute to our collaborations. We recently went on a tour and screened a bunch of short films we made at Sundance. We also published a book called “The Tiny Book of Tiny Stories” and are working on the next one. I invite anyone who wants to work with me – writers, filmmakers, editors, photo shoppers, musicians – to get in touch as I’m working on stuff all the time. It’s a lot of fun. Me? I just like making things. I would do this even if it weren’t my job. Getting started on any creative process is the biggest challenge, so just hit that red button and do it!