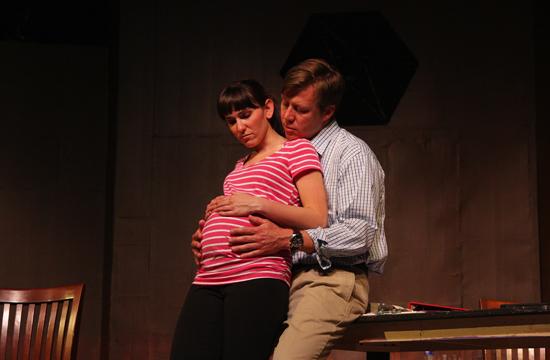 “Sand in the Air” is the world premiere of a new play by up-and-coming playwright Brian Raine, a first in the 65-year history of the Morgan-Wixson Theatre.

Raine deals with two uncomfortable topics: a trial for sexual misconduct and the corruption of an incestuously small town. The title seems appropriate, for like sand in one’s eyes, the play feels irritating and the feeling lingers afterwards.

The setting is a small Texas town called Yaktaw, near the Mexican border and, home to a plastics factory that employs almost all the residents. Young Dr. Howard Bogatch (Devin Williamson) and his wife Linden (Anya Warburg) come to Yaktaw with the hope that the small town environment will be a nice place for them to begin a family and for Howard to practice medicine.

But Dr. Bogatch is not a comfortable fit for the town. He finds that a few people seem to own everything, that everyone is expected to socialize with everyone else, and that his individualism (he opts for homeopathic remedies rather than the heavy drugs favored by the townsfolk) is not understood.

When Howard is accused of sexually molesting some of his female patients, he can only turn to one lawyer, Billy Rafferty, who also owns various local businesses. Rafferty is a boisterous “Big Daddy” type with a Southern drawl and, a penchant for bad lawyer jokes. Deviousness infects every syllable he utters. The doctor suspects that Rafferty is corrupt, that he might even be in collusion with the equally shysterish prosecutor, Nola Montgomery (Diane Alayne Baker). The main accuser, Thelmae (Barbara Lanigan), a flirt with short skirts and a tattoo, would normally be a prosecutor’s nightmare witness except that for this case she is being coached in behavior that will make her seem believable in court. Worst of all, it has been leaked that Howard is the son of a Congressman- perfect for scandal and rumors of big payments to “buy him off” the charges.

Raine’s play was inspired by an actual Texas court case. How much of the real case is portrayed in the play is not for the audience to know. The message is that American justice is buried under deep layers of money and influence, that small towns in certain parts of the country are more likely to be steeped in corruption, and that no social issue is sacred enough not to be exploited for monetary gain. The opportunists on both sides of the case obscure the real issues of sexual harassment.

The amorality portrayed here as endemic to small towns (and to the South) has been established as a literary and theatrical cliché think Tennessee Williams, whose work has influenced Raine. Raine works hard to make the story believable and does succeed in making us squirm. But the satirical touch that he is trying for does not come across. One waits for a twist and the only revelation that comes is that corruption can only be fought with more corruption.

It is largely through the acting of some of the ensemble members that “Sand in the Air” is able to establish some suspension of disbelief. Dominating all his scenes is Larry Gesling, a Morgan-Wixson company veteran, as Rafferty. He manages to make the character detestable without resorting to scenery-chewing. Williamson, a newcomer, handles the role of Dr. Bogatch admirably, slowly unfolding the multiple layers that make up this young man’s personality. Barbara Lanigan makes Thelmae an amusing caricature of a Southern vixen.

Some scenes in which characters talk at the same time are a bit difficult to follow. A few lines of dialogue also were not as audible as they should have been. While director Teresa Dowell-Vest has the cast delivering its lines rapidly, a little slowing down would help with the diction, which is especially important in the opening scenes.