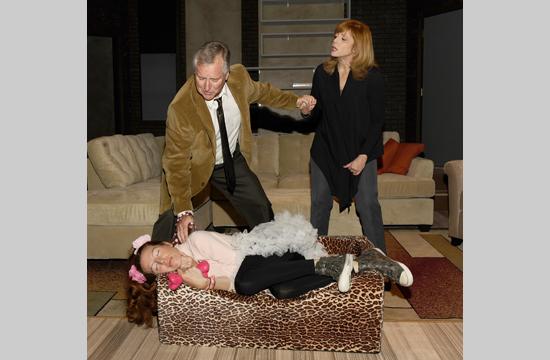 On the opening night of A.R. Gurney’s “Sylvia” at the Edgemar Center, the audience laughed so much that the cast had to pause before speaking their next lines. This play generates as much mirth and more as any comedy film playing at the local multiplex. It also probably can’t be made into a film because the literal quality of film is in opposition to the ability of live actors to engage the audience in believing what they don’t see. And the unseen that is believable here—and hilarious too—is that the title character, a mixed-breed stray dog named Sylvia, is played by a real human female named Tanna Frederick.

Frederick, who appeared previously at Edgemar in Henry Jaglom’s “Just 45 Minutes from Broadway,” and has done other films and plays by Jaglom, is extraordinary in her interpretation of a dog. Actors often do exercises where they assume the characteristics of an animal, but sustaining the animal persona throughout a two hour show is strenuous. Frederick almost never stops moving as she runs about the stage, jumps on the furniture, jumps on people, makes noise, chews shoes, and is sometimes a bad doggie. Yes, she also talks like a human and expresses dog emotions in human terms (“I have to pick up my messages” she says as she sniffs the sidewalk). But hey, don’t most of us engage in “conversation” with our pets?

Sylvia, who apparently belonged to someone but has strayed or gotten lost in Central Park, attaches herself to Greg (Stephen Howard), a middle-aged New Yorker who immediately is so taken with the perky pooch that he takes her home to the condo he shares with Kate, his workaholic and uptight wife (Cathy Arden). Kate had been looking forward to living the city life with just her hubby now that their kids are in college. But Greg’s interest in Sylvia seems to become an obsession. Kate insists that she doesn’t dislike dogs—it’s just this dog. She agrees to let Sylvia stay for a few days so they can see how it will work out. But as Greg and Sylvia grow closer, Kate develops a real antipathy to the dog—as if Sylvia was “the other woman.”

Early on, during the slapstick that ensues from Sylvia’s overenthusiastic leaps, sniffs, and other dog behavior, Kate’s attitude seems understandable as Greg does seem to be going off the deep end. Eventually, though, we see that there is something askew in the marriage—a lack of physicality, affection, and not as much communication as there should be. Sylvia may be a dog, but apart from the unconditional love that dogs famously give, she also gives Greg what Kate doesn’t—a sense of life: being fun, spontaneous, and uncomplicated.

Gurney’s play ran on Broadway in 1995 but has been updated and adapted by director Gary Imhoff (who also directed Frederick in “Just 45 Minutes from Broadway”). Imhoff’s contribution in directing is as significant as Frederick’s: there has to be a rapport between actor and director when dealing with the onstage antics here. Scenes that could have become chaos are handled with deft physical choreography and not one line or facial expression is out of step.

Howard and Arden are very good as the couple who need a dog to bring them together after almost tearing them apart. Tom Ayers, a veteran comedian and actor, adds more laughs with his supporting roles as a fellow dog-owner who reads self-help books and as a friend of Kate’s who speaks in ridiculous malapropisms.

“Sylvia,” which played at Sierra Madre Playhouse earlier this year, is scheduled to run into July at the Edgemar. But if audiences keep rolling in the aisles like they did at the opening show, this production may run as long as “Just 45 Minutes from Broadway” did. “Sylvia” is one dog to keep.