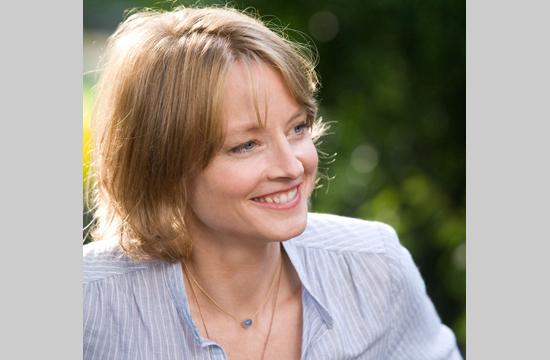 Jodie Foster is one of Hollywood’s most respected and highest paid actors, whose compelling performances have brought her Academy Awards and multiple nominations. The consummate actor’s vast array of characters are so fully actualized that you can taste her fear, (“Silence of the Lambs,”) feel her physical pain (“The Accused,”) experience her steely determination to win, (“Inside Man,”) identify with her as she risks her life to save her child (“Panic Room” and “Flightplan,”) or understand her acts of revenge, (“The Brave One”).

Foster made her directorial debut with “Little Man Tate,” and has directed several films since then, her latest being “The Beaver,” the story of a depressed man, played by Mel Gibson, who enlists the aid of a hand-held puppet to help him navigate through his crumbling life. The cast includes Foster as his wife, and Anton Yelchin and Riley Thomas Stewart as their sons.

The director recently sat down with a few journalists to discuss the film and the following interview has been edited for print purposes.

If you were describing the complex story for the first time, what would you say?

Foster: I would definitely call it a family drama, but the film has a lot of light moments so most people might assume that it’s a comedy. It could also be described as a fable and has a tone that has both lightness and darkness in it.

What attracts you to a script either as an actor or a director?

Foster: I make personal films and the first audience member is myself. Does it touch me or doesn’t it touch me is my first question because often if it touches me, I can find a way to communicate that.

Was Mel Gibson your first choice to play Walter and do the voice of “The Beaver?”

Foster: I felt he was right for the part and he was my first choice for sure. He has an exceptional quality that is very difficult to find. He has a light touch and can do roles that require a lot of wit so I knew he could capture the charm of “The Beaver.” He is also someone who understands trouble and that’s the part that he knows personally. Mel has his own demons and wants to change. I know the raw side of Mel and feel like I know his sensitive side as well so I never questioned that he would be able to find this in the character of Walter Black and get it on the screen.

In some ways Mel’s life parallels his character. Did you have any concerns about that or did you embrace it?

Foster: It’s certainly not why I chose him, and the scandalous stuff happened after we finished shooting the film. But we definitely bring our personal experiences to the table. And as I said, I think he’s someone who really understands trouble.

Do you think this was a good experience for him?

Foster: I don’t know. I know it was for me. Making films, especially as a director, you work on a film for two-and-a-half years. You dream about it and wake up at 3 a.m. in the morning thinking about angles and changes that need to be made in the script to keep it true to the characters.

Do you find directing and acting in the same film very difficult and that perhaps the acting suffers in some ways?

Foster: Mel and I have had many discussions about this and we both agree that we never want to act and direct in the same movie again. It’s very hard and tiring. You don’t experience a lot of the joys of acting or directing because you’re busy putting on other hats and you don’t get a lot of surprises from your performance. You just get what you anticipated and you don’t get moments that come out of nowhere. But in this case, once I brought Mel aboard, I started thinking about whom I would hire to play his wife. I needed someone who would be a stabilizing influence and who the audience could see “The Beaver” through her eyes. It also had to be believable that they had been together for over 20 years, and ultimately I thought I was the best one for the role.

How did you go about creating “The Beaver” as a character?

Foster: I knew Mel had the skill to play both characters and there was a lot of planning. Shooting decisions were made, that the audience wouldn’t notice, that allowed them to experience the complex relationship between Walter and “The Beaver” in a certain way.

How did you come up with the look of “The Beaver?

Foster: We talked to a lot of special effects units, including Mel’s company, and everyone came in with different ideas. The spectrum was you could have a perfectly real looking beaver you could fish out of the water that has a little fur and little eyes, or a sock and two eyes, and somewhere in between were other choices. So the choice had to be made intellectually. It comes down to how do you want to audience to experience “The Beaver,” who is actually a prop.

How did you get Jon Stewart to do the film?

Foster: He never did a film playing himself before, so we were lucky that he saw the beauty of the film and wanted to be a part of it.

Can you explain the scene where Mel seems to get attacked by “The Beaver?”

Foster: I think it’s a psychotic episode and that is the moment in time when “The Beaver” takes Walter over and Walter’s psyche state is completely lost. A man beating himself up is as real as blood and it’s a very jarring moment in the film. It’s frenetic and hard to watch and was hard to shoot because we used a hand-held camera.

What is your approach to either acting or directing?

Foster: While you’re making a movie, you try to create the most honest portrayal you can and that comes from your own experience. You ask yourself what is the thing that I know that is true. Especially in drama, authenticity is worth its weight in gold and that’s what you’re always looking for. Should the character’s handbag be blue or green? Somewhere about either three-fourths of the way through the movie or at least in post, you realize it’s a good thing that you have all this confidence because you could fall on your face.

With regard to using “The Beaver” as kind of an alter ego, have you gotten any feedback from people who are depressed?

Foster: I did hear from people who were either depressed, or knew people who were depressed, and the feedback was encouraging. Puppets are used all the time for children who have problems, so it’s very common. But, we were definitely biting our nails as far as how this movie would be perceived.

What gave you the most anxiety?

Foster: I knew it was possible that no one would love this movie and you live with that fear. But truthfully, my biggest rollercoaster was finishing the film. The post-production was probably one of the most challenging times of my professional career. It was hard getting it right and getting anyone to understand what I was trying to do. Usually my films in post are pretty easy because I don’t overshoot, I print very little, I don’t have long scripts, and don’t have long first cuts. But you deal with what you have to deal with. It’s hard getting a film made, especially a personal film, so I’m delighted to have been able to make this movie.