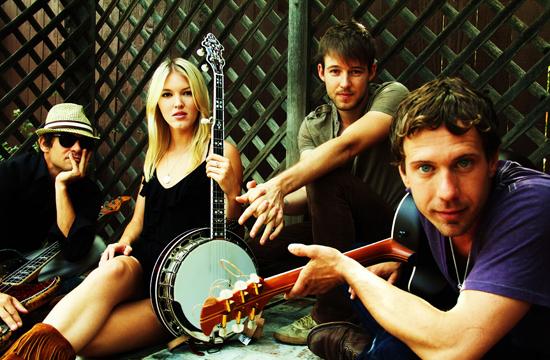 The members of the Los Angeles based group Instant People are no strangers to life on the road and performing with big names. The foursome, comprised of Ry Jarred, Siggy Sjursen, Cal Campbell and sister Ashley Campbell, got their first break opening for Glen Campbell’s 2010 UK Tour. Now the group is making their mark playing in L.A. and creating new music for their future album.

Jarred and Cal Campbell became friends growing up in Arizona. Each started working on their own projects when first coming to L.A. and eventually hit an epiphany when they started working together. Campbell called on his siblings, and a local bass player, Sjursen, to round out the group.

The rhinestone cowboy himself, Glen Campbell, is Cal and Ashley’s father, and they were encouraged from a young age to embrace instruments. Cal said he started playing the guitar by age three. He mixes and produces the songs, and also plays drums and guitar. Ashley contributes vocals, keyboard, guitar, and the banjo.

Smooth, melodic, and soulful, their sampler EP, “Songs from We Must Be Camping,” is laden with sonic landscapes and driving beats. Although each lends their voice to the songs, it is Jarred’s raspy vocals that stand out. From the harmonics of “The Strangest Thing” to the transcending texture of “Home,” this debut effort is a sign that the time is certainly right for Instant People to be introduced to L.A.

While Jarred lives in Venice, the rest of the group is spread across the city, grabbing influences from all areas. The group is very much into texture without taking themselves too seriously.

Instant People performed at The Roxy Theater on April 22 with Purple Melon, Run Devil Run, and Johnny Stratt, among others. This is one of a string of performances that are scheduled for the coming months. On May 10 they will play at the Central Social Aid and Pleasure Club with resident band for every Tuesday in May, The Lonely Wild. For more information about the show or the band visit centralsapc.com or instantpeoplemusic.com.

By mirrormmg May 8, 2011
in Life and Arts
Related Posts