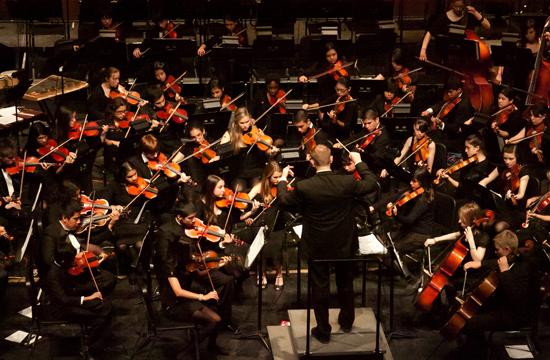 The Santa Monica High (SaMoHi) orchestras took a packed house from 100 million years BC to the year 2387 with a wave of music on Tuesday, May 24.

If anyone has seen a movie recently, they have heard these scores underneath the dialogue. “Star Trek,” “Forrest Gump” and the headliner that started the “Back to the Pops Concert” theme, Back to the Future.

“The first thing we do is we come up with a theme,” SaMoHi orchestra director Joni Swenson said. “Time travel was an easy theme because everything happens sometime, so it gave us a little more latitude (in selecting pieces).”

To go with the movie theme, a red carpet was set up outside Barnum Hall that led to a DeLorian, which was blocked off by ropes, of course. The car was donated by California DeLorian and students, faculty and parents all posed for pictures outside with the “Time Machine.”

Other creative tidbits from the event included movie posters, featuring the “Back to the Pops Concert” banner, the monotone voiceover to let the audience know they needed to buckle up for this adventure, and appearances from Captain Jack Sparrow and Harry Potter.

“The great thing is that the students have a lot of fun and are willing to put in the work and the effort,” said fellow director Jason Aiello. “A lot of these ideas are from the students and not from us. It is their work that comes to life here.”

Another special guest of the evening could only say words in a pre-recorded video. Patrick Doyle, composer of the music for “Harry Potter and the Goblet of Fire,” showed his appreciation by saying thank you and by counting the orchestra in for the medley. Swenson said one of the students has worked closely with Doyle, so the orchestra made the connection to play the medley.

Although one parent said 2011 didn’t beat the Star Wars theme from 2010, Aiello and Swenson enjoyed the night.

“It’s just a great community event and to have so many people come is really a thrill for the students, and it’s nice to bring everyone together,” Aiello said.