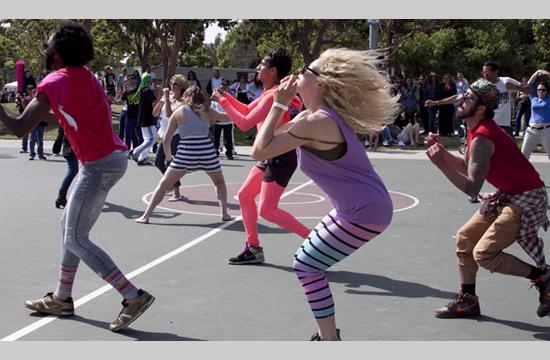 A plastic bag monster and a dance maniac in leopard tights were among the hundreds lurking in a cloudy Clover Park last Saturday, May 7, for the 20th Annual Santa Monica Festival. From 11 a.m. to 6 p.m. musicians and dancers kept crowds energized at the entirely eco-friendly event in celebration of the intersection between art and the environment.

Presented by the City of Santa Monica’s Cultural Affairs Division and Office of Sustainability, and hosted by KCRW’s Garth Trinidad, the festival presented everything from karate to cooking demonstrations. Food trucks kept festival attendees full of locally grown meals, and eco-encouraging businesses and organizations provided environmentally smart solutions to daily living at the solar powered event. Chefs and farmers were paired by Laura Avery of the Santa Monica Farmer’s Market to work together to share cooking tips and recipes with what is currently in season.

Biking and biker safety were hot topics at the festival. A free bike valet encouraged attendees to avoid dealing with vehicle parking and pedal their way to the festival, and instead pedal their way. Additionally, bikers could learn DIY bicycle repair, view a bike exhibition from Santa Monica Spoke, obtain a biking license, and even join in a cycling themed art workshop to help track their paths with a scrap book of illustrations, tips and rules of the road.

Independent artists and vendors sold handcrafted gifts, perfect in time for Mother’s Day. Bede Ssensalo with Kamu Kamu African Arts and Crafts has been a vendor with the Santa Monica Festival since its very beginning. Though he attends other festivals throughout the year, Ssensalo claims Santa Monica Festival as his favorite because of the camaraderie, entertainment, and message of waste control. Kamu Kamu is unique because most of the African art is from East Africa, specifically Uganda, Kenya, and Tanzania, wheras, Ssensano explains, most African art in the U.S. is from West Africa.

Booths were set up to allow the public to intermingle with those involved in helping to better Santa Monica. Michael Ware, project manager with Eco Motion and long time resident of Santa Monica has been attending the festival for several years, and has worked at is for the past four. Eco Motion operates the Solar Santa Monica program, which promotes the adoption of energy efficient and solar technology. Ware enjoys the festival for all of the activities, but especially the live music. “You see people get up and dance, the kids like to dance. It’s a great way to get people used to all the City services because they can go by and see the booths. It’s just a fun day,” he said.

The festival relies heavily on volunteers. Some of whom endured less than comfortable conditions to get out their eco-conscious message. Santa Monica College student Kris Gao walked the festival dressed from head to toe in used plastic bags. With the City’s plastic bag ban on Sept. 1, to begin enforcement, Gao was helping to educate Santa Monicans on the importance of adopting reusable bags. Reusable bags were given away at the festival by simply signing up. “It’s good for everybody,” Gao said. “People save money and its good for the environment.” As for the costume, though he admitted it was very hot, Gao said he wished he could keep it for Halloween.

Hermosa Beach resident Miriam Heath saw a listing for the festival online and decided to make the drive to attend for the first time. She spent the entire day at the festival with her boyfriend and daughter, Grace, celebrating Mother’s Day and checking out the earth friendly booths and food trucks. Even the family dog, Hazel, enjoyed organic dog treats while the others lounged in the grass to people watch. “I think it’s a ton of fun. I love how interactive it is . . . It’s not a passive event,” Heath said.

Proving its impassiveness, the festival concluded with a “Dance Attack” performance put on by choreographer Ryan Heffington of The Sweat Spot in Silverlake. Heffington and other Sweat Spot dancers kept festival attendees dancing throughout the day, teaching them moves that would later become a flash mob at the Ocean Stage. The energy was high as the dancers joined forces to showcase, in physical form, the theme of the festival: intersecting art and the environment.

By mirrormmg May 8, 2011
in Life and Arts
Related Posts