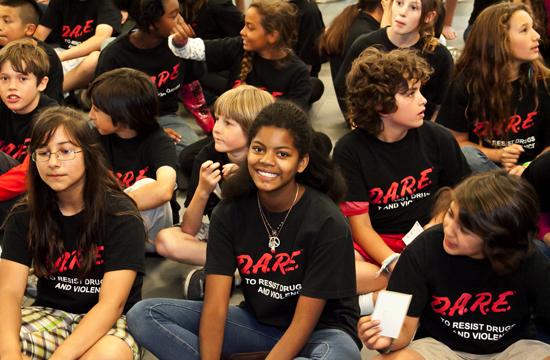 According to the police officers involved, including Chief Tim Jackman, Santa Monica’s trial run of the Drug Abuse Resistance Education, better known as D.A.R.E., was a success.

Fifth-graders from Grant Elementary School, about 120 in total, pledged to remain drug-free because of aspirations that ranged from staying close with family to becoming a professional soccer player.

“It was the perfect age,” said Officer Jennifer Rodriguez, co-teacher of Grant’s D.A.R.E program. “The kids were enthusiastic. They were excited every time we walked in the room. We usually got a standing ovation. They still think police officers are cool, so we were able to relay the message to them because of their age.”

Chief Jackman said the ideal model for D.A.R.E. is a class in elementary school, middle school, and high school, but there are limitations to doing that.

“This is better than nothing,” Jackman said, “so this is a good place to start (implementing the program in the city). We’ll see how it goes.”

Jackman said the program will need help from the families, and he was impressed with the turnout at the event.

“The amount of parental involvement in a program like this, understanding what their kids are doing, the risks and dangers their kids face is huge,” he said. “You know, as a parent, I’m concerned about my kids. I’m sure they’re concerned about theirs.”

Officer Austin Brown helped teach the program with Rodriguez, and he wants the best for the kids in their futures.

“Whatever they’re faced with in life, (we hope) they think about their options and make good decisions,” Brown said.

Rodriguez said SMPD is hoping to expand the D.A.R.E. program to other schools in the area.