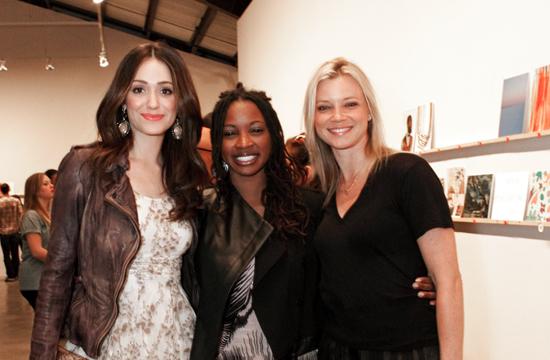 While patrons shuffle in winding lines, chatting with friends or comparing strategies, Steve Fife waits in line sipping a cocktail with a grin on his face. Fife has an advantage that some other art lovers at this year’s Incognito art sale do not — he knows what’s inside.

The seventh annual event at Santa Monica Museum of Modern Art at the Bergamot Station gives serious collectors and art novices that chance to purchase original works of art by established and emerging artists for the bargain price of $300 each. Here’s the rub: collectors are not told what artist has made what pieces until after their purchase, hence the event name Incognito. Many who buy tickets have no idea what the art actually looks like until they get inside.

Tickets range from $100, the basic price to go in blind, up to $10,000, which includes, among many incentives, a champagne preview of the artwork, four artwork vouchers, an invite to a closing reception, and the coveted front of the line. Participants lined up according to ticket prices with top tiers going in separate doors, gaining first choice at their selections. The bottom tier is forced to wait to peruse the remaining pieces.

As a first year participant at Incognito, Fife, a writer and art collector, said before going into the gallery, he had four or five choices in mind thanks to the preview. “Whatever’s there is there,” he said, knowing that even as the primary group to enter, there are no guarantees. He was one of the many hoping to take home the prized Ed Ruscha piece.

Other first time participants Kayla Javahery and Maya Syeinberger waited patiently in anticipation of going into the event. Both admitted they had no idea what to expect.

A countdown to entry brought out a look of hunger in waiting aficionados’ eyes that had nothing to do with the plentiful food spread. A rush at the door looked more like an orderly walk when entering the building. Segregated lines waited anxiously.

Theresa Traber and Claude Cazzulina, who each paid $100 for tickets, admitted they didn’t know much at all about art, but looked forward to the chance to find something that “catches our fancy.” Cazzulina said that he didn’t want to try to analyze the pieces in the heat of the moment — after all pieces are only 8” by 10” portrait size — instead he chose to rely on the “luck of the draw.”

SMMoA volunteer Kate Brown worked as part of the crew that retrieved artwork once buyers selected. Participants claim a piece and then exit the gallery to pay, still unaware of the artist’s name, that is unless they have done their research. Brown explained that some art lovers can detect what pieces belong to specific artists, but the real fun is to see them discover what they bought.

SMMoA benefactors Steve and Susan Adamson bought a collage piece, “Snowy Head,” by Greg Miller that may not have been their first choice, but it was their third. Susan said even though they knew exactly what they wanted, the choice could have been one from 20 others to select. “We want to make a wall of what we get each year,” she said with excitement evident on her face.

As people mingled and ate after making their selections, others filtered into the gallery, ready for their chance. Fife did not leave with the Ed Ruscha – it was gone in the feeding frenzy before he got in. He said companion Karen Biou managed to get the piece she wanted, the “most beautiful in the room,” and what is sure to be the perfect mother’s day gift.

By mirrormmg May 5, 2011
in Life and Arts
Related Posts