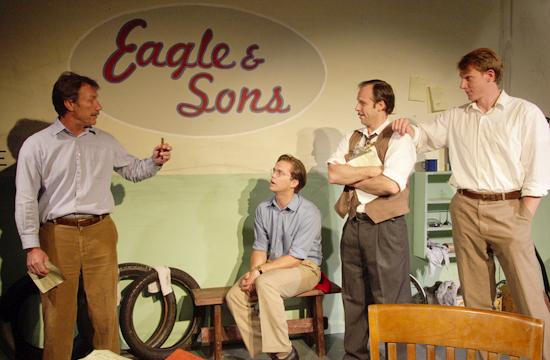 The funky jobs that most of us have taken at one time or another are portrayed in Arthur Miller’s “A Memory of Two Mondays,” now playing at the Ruskin Group Theatre. This is one of Miller’s less-performed plays and it may surprise theatergoers who are expecting the serious social comment and ultimate tragedy associated with Miller’s work.

To be sure, “Memory” has its dark moments, but there is also much humor and some downright slapstick comedy in this long one-act play about two Mondays set six months apart in an auto parts warehouse in Brooklyn during the 1930s Depression.

Miller himself was 18 in 1933 and worked at a series of blue-collar jobs until he had saved up enough money for college. In “Memory,” Miller’s alter ego is Bert (Lane Compton), a young man who reads The New York Times (and is trying to finish “War and Peace”) while he works at the warehouse and puts away most of his salary toward college tuition.

For Bert, the warehouse job is a means to an end but it is not the same for his co-workers. The foreman, Raymond (Gregory G. Giles), is a regular working guy who can’t understand why anyone would read a book. The switchboard operator, Agnes (Lynn Wanlass) frets over everyone else’s problems and cries a lot. Larry (Jason Paul Field) wants more money but has overspent his earnings on a car and is getting in over his head in an affair with a female co-worker. Tommy (Conor Walshe) comes to work so drunk he literally can’t stand up while old Gus (Richard Leighton), a German immigrant, blusters around the office, demonstrating a lust for life that does not entirely disguise his inner despair. The only employee who relates to Bert’s dreams is Kenny (Nick Cimiluca), an Irishman who recites poetry by heart and scolds the others for their lack of morals.

The first half of the play depicts a hot summer morning at Eagle and Sons Auto Parts, with employees working– or trying to work, while engaging in horseplay and attempting to revive the hung-over Tommy before his boss catches him slumped over on the top of the desk. During a dimmed-lights interval that serves as a transition (there is no intermission), Bert and Kenny decide to clean the windows, an action that sets the mood for the second half, which takes place the following winter. Bert is about to leave for college; he’s six months older and is seeing his workplace as simply a phase of his life that he will forget as soon as he leaves. But the other workers also seem to have “grown up” and are unable to find the same easy escapism that they had been using to pass the time while performing their dull tasks.

Director Amelia Mulkey, who says she “first read and fell in love with” “A Memory of Two Mondays” while studying at Loyola Marymount University, has directed the play with a deft hand, doing a good job with the slapstick, and managing the almost constant movement of the many characters as they walk and run in and out of the main warehouse room. The set by Cliff Wagner has an authentic run-down appearance with grimy windows, dilapidated furniture, ancient props, and a restroom that characters actually disappear into.

But the performances here are what make the play. Each of the workers, from the boss (Billy Ensley) who merely walks to and from the restroom, to the delivery guy (Jeison Azali) who admits that he finds girls to have a good time with on his various delivery routes, is affectionately realized in Miller’s words and brought to life by a cast who have definitely found the reality of their characters. Most poignant is Leighton as Gus, whose behavior runs the gamut from Falstaff-style mirth to choked sobs, to reckless debauchery. Cimiluca, in a quieter way, makes Kenny a sympathetic if somewhat deluded person.

Arthur Miller recalled the Depression as a time in American history when Americans were drawn together by adversity: “[E]verybody was in the same boat … and perhaps we understood each other a little better.” This modest play illustrates that idea very well.

By mirrormmg June 26, 2011
in Life and Arts
Related Posts