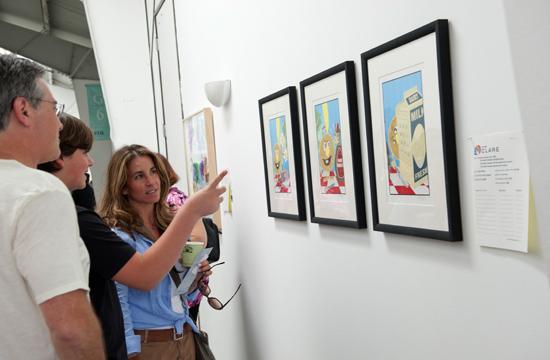 The atmosphere was rich with art, food, stories and inspiration at Bergamot Station on Sunday, June 12 for the Fifth Annual Art for CLARE fundraiser. This year’s event raised an estimated $50,000 to help fund CLARE’s dedication to saving lives through recovery. CLARE is a nonprofit organization that has 11 programs in the Los Angeles area, providing residential and outpatient services to more than 3,000 substance abuse and alcoholism victims every year.

Over 50 local artists donated more than 60 pieces for auctioning. Live music was performed by artistic director and violinist Chris Murphy, accompanied with Bryan Titus on guitar and John Ossmann III on bass to create The Wine and Roses Band. Bidders enjoyed some of the absolute best of Los Angeles’ restaurants, including Lemonade, Urth Caffe and Leigh’s Cake Divas, who provided two sheet cakes decorated especially for Art for CLARE complete with paint splashes and a paint brush.

Actress and best-selling author Meredith Baxter co-chaired the event. She got involved with CLARE eight years ago when she was asked to fill in at a dinner party as the master of ceremonies. She had never attended a CLARE event before, and was “blown away,” by the organization. “This is not just a high falutin’ recovery center,” she said. “This is a center that takes care of people whether or not they have the ability to finance themselves . . . I thought, I’m missing a really good opportunity not to get involved here, so seven years later here I am.”

Over those years, Baxter can recall several instances with CLARE that have personally impacted her. She explained that four times a year CLARE conducts a client advisory in which members of the board pull clients and ask them about their experience with the program. At one such advisory Baxter met a man that “was just crazy; he had so much energy and he was so happening.” The man had only been at CLARE for about five months, and was soon to be leaving the program. Baxter thought, “This is a guy who is going to go on and be head of the world.” She ran into him months later at Lemonade, where he was working, and the two actually ended up working together to get the restaurant involved in Art for CLARE, where they still continue to cater the event.

Executive director of CLARE, Nicholas Vrataric, was been working with CLARE for nearly 13 years. He has been in recovery himself for about 20 years now, and enjoys seeing others better their lives. “It’s such an amazing turnaround . . . these people that are driving their lives off the edge of a cliff and are able to turn around and become much more aware of the possibility that there is a good life they can find,” he said.

Vrataric is excited to take on new challenges in health care. He explained that with a new health care law “on the books,” a lot of changes will likely occur over the next few years in terms of how CLARE’s services are accessed and delivered. “It’s a time of real challenge for us . . . we’re looking forward to it and we think that a lot more people will be able to access our services.”

Artist Tommy Hollenstein began painting at age five, he began volunteering with CLARE answering phones about 20 years ago, and has been donating paintings to Art for CLARE for the last four or five years. This year he donated a painting titled, “Happen.” But no brushes were involved in creating this painting. Twenty-six years ago Hollenstein was in a mountain bike accident that left him wheelchair bound. “You know, something happened but I’ve continued to go on, I’ve continued to do art since I was five years old, I wanted to be an artist and I just didn’t let anything stop me. “ Hollenstein now uses the wheels of his wheelchair to create each and every layer of his paintings. His story of pushing on and taking control to live a fulfilling life truly sums up the driving force behind CLARE’s hope for their patients.

To learn more about the CLARE Foundation, visit clarefoundation.org.

By mirrormmg June 15, 2011
in Life and Arts
Related Posts