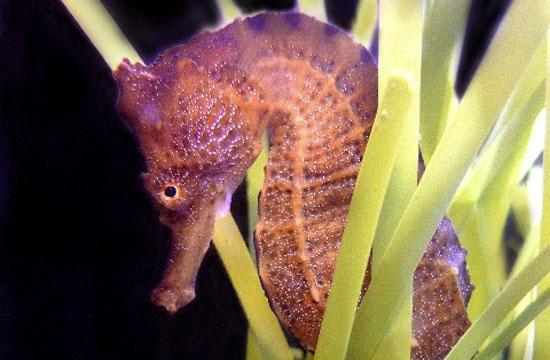 At first it doesn’t look like much– just a big tank with some green stalks growing in it. Then you look closely and see the tiny dark creatures– long spiny tails coiled around the stalks, their heads very similar to the heads of real horses. There are five of them. They seem to stay together as couples and at the moment, there are two couples cuddling closely and one lone seahorse, living the single life at the bottom of the tank.

Santa Monica Pier’s Heal the Bay Aquarium has brought its Pacific Seahorses (hippocampus ingens) to the spotlight all this month. Think of the seahorse tank and the other aquarium exhibits as living art. One can enjoy looking at the shapes and colors of the marine life for aesthetic reasons. But these “objects d’art” have fascinating life cycles and habits.

The Pacific Seahorse has bony plates on its body instead of the usual fish scales, and a sort of “crown” on its head. It can grow up to 12 inches, and typically lives in shallow water to a depth of approximately 65 feet. Seahorses can be found in a range from Point Conception to Chile and the Galapagos Islands.

Their main source of nourishment comes from very tiny crustaceans such as amphipods and mysid shrimp. Their method of ingesting is to wait until the crustaceans come close, then suck the creatures in through their tubular snouts.

The most interesting and often amusing fact about seahorses is that it is the males who “give birth.” The female seahorse deposits her eggs in the male seahorse’s broad pouch. The “fry” hatch in about 14 days and measure between seven and 12 millimeters.

Speaking of seahorses as art, their remains are very popular in souvenir shops that sell shells. Seahorses are often seen incorporated into clear plastic jewelry or paperweights. But seahorses are endangered by the souvenir trade, as well as by coastal development and habitat devastation. The aquarium is asking people not to purchase seahorse items in gift shops and to leave dead seahorses on the beach.

Looking around the aquarium, one can find other beautiful and amazing living art beings such as sea stars. These star-shaped echinoderms move so slowly that for a long time, scientists were unsure if they moved at all. It can take a sea star about 15 minutes to turn over! Equipped with two stomachs on their undersides, sea stars eat by opening their stomach orifices to take in smaller marine life. They have been known in some cases to grow new limbs to replace limbs that were severed by one means or another.

All the residents of the aquarium are available for “adoption.” According to aquarium director Vicki Wawerchak “We have nine different species you can adopt.” Adoptions levels range in price from $25 to $1000 and are good for one year. Those who adopt a marine specimen will receive various benefits (such as certificates, photo I.D. cards, VIP tours, and other special events) depending on the level.

Because the Pacific Seahorse is featured for the month of June, adoption is being offered at a discount rate of $50, which will increase to $250 after July 1.

One of the special events that will be held periodically at the aquarium is the “artists’ night.” The second of these nights was just held at the aquarium on June 8. Twenty-five participants were allowed to sketch, paint, and take photos of the aquarium’s species, including the sea horses.

For more information go to healthebay.org/smpa

By mirrormmg June 13, 2011
in Life and Arts
Related Posts