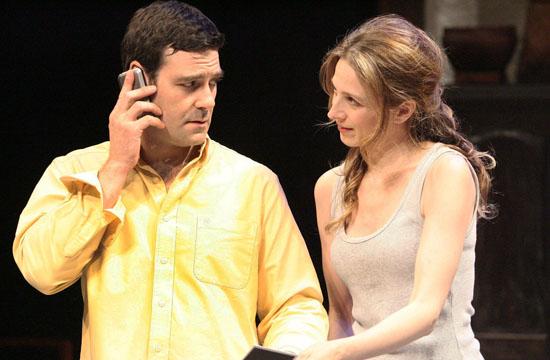 The world premiere of David Wiener’s “Extraordinary Chambers” at the Audrey Skirball Kenis Theater at the Geffen Playhouse is a stunning fictional drama, directed with great skill by Pam MacKinnon. The plot revolves around a troubled couple who visit Cambodia on an innocent business trip, which turns into a political cat-and-mouse game.

With the atrocities committed

from 1975 to 1979 by the Khmer Rouge, known as the Democratic Kam-puchea”ampuchea, slowly inserting itself into the unfolding events, we first meet the American couple, exquisitely played by Marin Hinkle as Mara and Mather Zickel as her husband, Carter. He has come to Cambodia to close a big telephone deal and persuaded his depressed wife to join him to perhaps cheer her up. Their guide is Sopoan, a survivor of the Khmer Rouge atrocities, played with profound emotion by Greg Watanabe. Seated on a chair center stage with a single light on him, he captivates the audience with his painful monologues interspersed throughout the play about his torture and the loss of his wife.

Sopoan drives Carter and Mara to the Phnom Penh home of the deal maker, a high-powered businessman named Dr. Heng, played to sheer perfection by Francois Chau, and his angry, enigmatic wife Rom Chang, played by Kimiko Gelman, who captures the hidden layers of this most complex character. Both she and Chau have dialogue in both French and Cambodian, adding to the authenticity of the script.

The truth and accompanying hidden agenda slowly begins to unfold. Dr. Heng is going to be tried for his alleged participation in the crimes committed during the Pol Pot reign of terror that resulted in the killing and torture of almost two million Cambodian intellectuals, businessmen, Buddhists, and foreigners. He claims he is innocent but desperately wants to arrange for his wife to get out of the country to spare her the horrors of the trial. But is that the real reason? His plan is to offer the adoption of a baby to the Americans who had lost their own child in an accident that is never quite explained, but we are led to believe it was through carelessness. The hitch is that Americans can’t bring Cambodian babies into the country, so Rom would bring the baby to America, securing both her freedom and a child for the couple. Mara has met the green-eyed baby at an orphanage and wants him no matter what Dr. Heng might have done. This results in great conflict between she and Carter, who wants no part of either Dr. Heng, his wife, or the baby.

As the business deal begins to fall apart, accusations fly back and forth as to the guilt or innocence of Dr. Heng, with Carter being convinced that he is indeed guilty as charged. The moral question is posed: Is it worth saving the life of one baby despite the illegality of the action? There are twists and turns to the story with a surprising ending shock for the audience.

The production values serve the play extremely well, beginning with the versatile set by Myung Hee Cho, which functions as both the interior of a hotel room and the home of Dr. Heng. With a beautiful garden showing through a window on the upstage wall, the sparse but effective set captures an almost Feng Shui feeling. Lighting design by Lap Chi Chu enhances the set with the appropriate mood lighting, as does the sound design by Vincent Oliveri, which helps orchestrate the multiple smooth set changes. Hana Sooyeon Kim’s compelling rear screen projections of the faces of people tortured or killed are a chilling reminder of the incredibly brutal treatment mankind is capable of, as evidenced by another period in history. One of the real tragedies being that so much of this particular horror was actually committed by very young people who had been totally brainwashed and turned into sociopaths. Director MacKinnon has elicited electrifying performances from her cast, making this an evening of theatre well worth the ticket.

By mirrormmg June 9, 2011
in Life and Arts
Related Posts