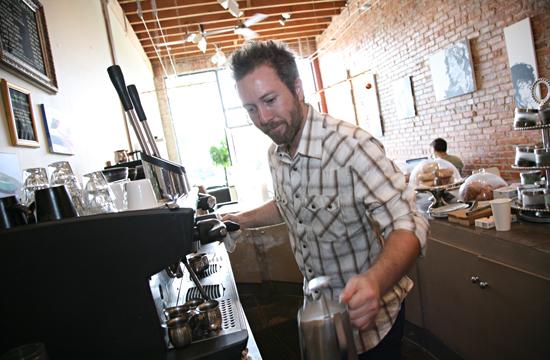 The narrow room (with a back patio) offers coffee drinks, and “healthy made-to-order” deli sandwiches on a choice of bread, bagels, and pastries, including wonderful chocolate muffins from Red Rooster Bakery. The work of a different artist is displayed each month on the brick side wall. Currently on display are the paintings of owner Ryan MacLeod Morris. Done in stark black and white, the paintings depict pop culture figures like Clint Eastwood and John Lennon.

Morris sat down with the Mirror over cups of Flying Saucers coffee to tell the tale of how he came to open the space, and what his plans are for its future.

Morris opened the café in October of 2009. “It was my first business – I realized it was probably the worst time imaginable to open a new business. But that’s just how you have to do it. I think I took advantage of the bad economy in some ways. I found a vacancy in an area that I really loved.”

At the age of 30, Morris found himself having had about 15 years of coffee house experience. “I’d just been doing it so long. And since I moved to L.A. from San Francisco in 2004, I was really disappointed in the lack of good coffeehouses – just for me to go to. Much less to open one – I had no idea I’d do that. I just felt like this neighborhood in Santa Monica had exactly the demographic of customers that coffeehouses thrive on– people with flexible schedules; creative types.”

Financing the venture took “a lot of saving up, a lot of credit card debt, and loans.” But Morris’ secret to survival was to do everything himself.

“My father, my brother, and I, any friends that could help, we literally built the entire thing with an absolute minimum amount of contracting. Just hard labor and design and installation – we just did it ourselves.”

But that isn’t to say that everything stayed on schedule. Morris originally hoped to open in May of 2009. “I kept thinking the store would be open soon and so I kept the sign out. The neighborhood was buzzing ‘When is this place gonna open? It’s taking forever.’”

“It was a tough process. It was tougher though in that I got a very old space and redid everything myself. If I had bought an existing business it would have been much easier; I would have just kept it open. But from the time I moved to this neighborhood seven years ago, I just had my eye on this specific little spot. It just called out to me. I thought ‘If I ever had a place of my own, an art gallery, that’s the place I’d like it to be in.’”

Being next door to Vidiots and its film class annex is, of course, an asset. “Vidiots is famous, legendary. I’ve been going there since day one. The customers are the same. They stop at Vidiots, they rent movies, they come in here and have a cup of coffee and talk. We even share a couple of employees. We’re almost like their little Vidiots tree house.”

Besides movie renters, Flying Saucers’ clientele includes members of all age groups from Santa Monica High School students to employees of City Hall, the police department, and jurors from the nearby courthouse.

The monthly art shows begin with an opening reception on the first Saturday of every month. “We pack the place, take out all the tables and chairs, have live music. We’ve had upwards of 200 people all in that tiny little space,” Morris said.

“It’s great for younger artists who can’t get into [the bigger galleries] because they don’t have long resumes. It feels great to be able to give back to the artistic community.”

Other events have included acoustic music nights, rock bands, spoken word events, and small private events such as a launch for a clothing company.

The name Flying Saucers comes from Morris’ interest in “flying saucers, the paranormal, Bigfoot, the Loch Ness monster, anything truly bizarre that might be real. I preferred it to science fiction.” Not just a reader on the subject, Morris developed an avocation of investigating paranormal mysteries. Shortly before launching the café, he created a website (uforadar.com) and a video on YouTube that explored his investigations about a “mystery creature.” The video has had nearly nine million views to date.

So whether one wants to have a cup of java or discuss an unidentified light in the sky, Flying Saucers is a welcoming place to be. “This neighborhood was begging for [a coffeehouse of the old tradition],” Morris said. “And I’m happy to say we are that. People hang out all day long and talk politics and art and fashion and UFOs. People have met here and married just in the year we’ve been open. It’s been amazing to see the café grow into something larger than myself.”

By mirrormmg June 24, 2011
in Life and Arts
Related Posts