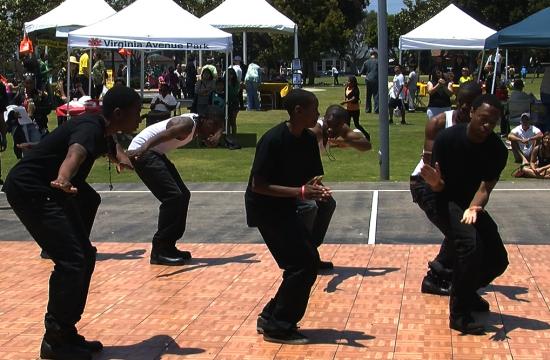 Historic holidays are typically celebrated on an approximated day, a time set aside as a representation of events that took place long ago. But on Saturday, June 18, members of the Santa Monica community gathered at Virginia Avenue Park to celebrate Juneteenth on the actual date it took place, 146 years ago. Juneteenth, sometimes called Freedom Day or Emancipation Day, marks the days that the abolition of slavery was announced in the United States in 1865.

Even though the Emancipation Proclamation’s effective date came about in 1863, it did not take immediate effect for most slaves, some enduring more than a year to finally learn of their freedom. Juneteenth represents June 18 and 19 in 1865, when federal troops arrived in Texas to enforce the emancipation. Juneteenth is now a state holiday in 37 states, and is widely celebrated across the country with picnicking, music and reflection.

Santa Monica’s 19th annual celebration was hosted by the City of Santa Monica and the Juneteenth Celebration Committee. Guests were greeted with southern food, vendors, and live music and dance performances. The First AME Baptist Church Gospel Choir, the Venice Baptist Church, The Tri-A Steppers, Samba Samba and the Chazzlava drum circle, and several other performers took the stage throughout the day.

Betty Melton, West L.A. resident and former Santa Monica resident heard about the celebration at Virginia Park through a friend, and decided to give it her undivided attention for the day. She explained that ordinarily most people celebrate Juneteenth on Crenshaw, and was pleased to see a celebration in Santa Monica.

“Because my children were born here in Santa Monica and my mother lived here a long time before she died, it’s nice to see that they have a group of black people moving in . . . and participating in some of the situations that are going on. That’s the reason I would like to give it my attention and support it,” she said.

Radcliffe Blake had never before attended a Juneteenth celebration, and was at the event selling Rasta-related items. Blake is from Jamaica, and spends his year split half in the Venice area, and half in Jamaica. He has been selling his items at a variety of events and venues all over Los Angeles for about 25 years. As he observed the park, Blake said that he felt so far that his impressions of the event were positive. “So far it’s good because I can see some unity and it’s violent free, and its safe for the kids and the family to move around so that’s good.”

The master of ceremonies for the day, Chazz Ross, has been involved in the Juneteenth celebration in Santa Monica for five years now. He has served as the emcee for four of the past five years, and helps to organize the event as well. It is clear when watching him on stage that he is passionate about the celebration. “I feel like I bring back. Because It’s all about the issue of slavery, it was like six months later that the slaves found out and I always felt like what can I do to just bring that back and keep that alive.”

Ross studied to become an attorney, but decided not to practice law, but to instead pursue playing drums and emceeing – his true passions in life. He says that every year Laverne Ross and the other organizers of the celebration try to make it different by bringing in new groups. This year, in addition to the entertainment, a panel discussion was conducted on the topics of understanding the U.S. Constitution and voting rights.

By mirrormmg June 20, 2011
in Life and Arts
Related Posts