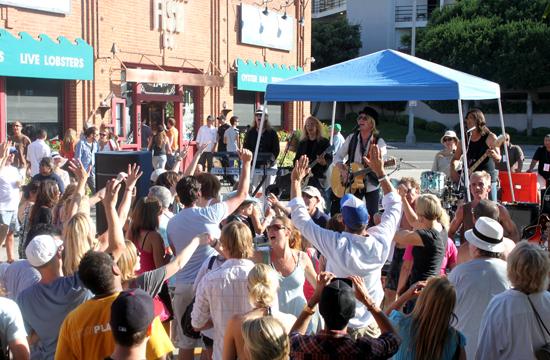 The weather was perfect for early summer: sunny and warm with a bit of sea breeze. And for the eleventh year, Santa Monica residents and visitors were out on Main Street for their annual seasonal rite: the Main Street Summer SOULstice.

The shopping and music festival was produced by the Main Street Business Improvement Association (MSBIA) and sponsored by a number of local businesses.

Twenty-five music acts played at the various stages up and down Main Street between Strand and Pier Avenue. Coordinating producer Gary Gordon noted that this year’s SOULstice featured more performers who have not played at previous SOULstices, as well as some of the favorites from past years.

Each stage had a kind of ambience of its own, almost in accordance with the type of music found there.

Down at the south end of the event, the Pier Avenue stage area was populated by people dressed in tie-dye, grooving to the sound of Cubensis. This tribute band does Grateful Dead songs and has an avid following (they had a steady residency at the former 14 Below Club in Santa Monica and currently perform on Sunday evenings at 14 Below’s successor, the Central Social Aid and Pleasure Club). Body builders from the nearby 220 Gym flexed their muscles to Cubensis’s mellow jams.

A stone’s throw away, at the Kinney Stage, another tribute band, Highway 61 Revisited, played Bob Dylan songs to a crowd of varying ages. Prior to their rendition of “Hurricane,” the front man told the audience that at one of their performances, the song’s inspiration, Rubin “Hurricane” Carter, got on stage with them and after all 12 verses had been sung, told the group, “That’s the first time I finally understood the words of the song.”

The New Orleans Building courtyard was decorated with colored paper doilies and was a good refuge from the bustle. Here, Mista Cookie Jar played “urban island folky-rock” family-friendly songs with his ensemble, the Chocolate Chips, which includes Mista Cookie Jar’s girlfriend’s daughter Ava Flava, an adept 10-year old rapper. Mista Cookie Jar told the Mirror that he performs regularly at schools, hospitals, and all over the “kindie” (kids’ indie) music scene. His CD, “The Love Bubble” was available for purchase.

The Elias lot at the northeast corner of Main and Strand had a new-age, peace-and-love vibe, with refreshments from the adjacent Euphoria and other organic vendors. Girls in long dresses danced to the world-beat sounds of Breath of Life Tribe, the mixes of DJ Drez, a spoken word interlude by artist/writer Francisco Letelier, and Ghana reggae artist Rocky Dawuni. Scheduled to appear soon at the Hollywood Bowl, Dawuni graciously performed an acoustic set for the SOULstice, urging the audience to rise up and dance to the blend of guitar, percussion, and his powerful voice.

The Wildflour lot next to the pizza emporium was the center for mostly original-material rock bands like Ben Vaughn and the Lost Mind Ramblers, who played a set of blues-flavored Americana, with nice touches of banjo and harmonica.

The Edgemar Center Courtyard stage beckoned with its fountain, and the chance for cooling off with Ben & Jerry’s ice cream and Peet’s iced coffee. Visitors enjoyed a crafts fair at one end of the courtyard while the Texas House Party entertained with a Western Swing set. Then more than a hundred people thronged to hear returning favorite Dr. Wu, the Steely Dan tribute band. Some very young children were seen dancing to Dr. Wu’s version of “FM,” which had been recorded 30 years before they were even born.

The SOULstice seemed to have done well with drawing an audience (the Santa Monica police didn’t have a figure but said the event was well-attended and orderly), but the future of the summer street celebration is in doubt. Gordon and MSBIA chair Christina Norton told the Mirror that due to the economy, sponsorships are becoming more difficult to obtain. How Main Street businesses fare during the next year may decide the fate of the Summer SOULstice. But for 2011, a good time was had by all.

By mirrormmg June 28, 2011
in Life and Arts
Related Posts