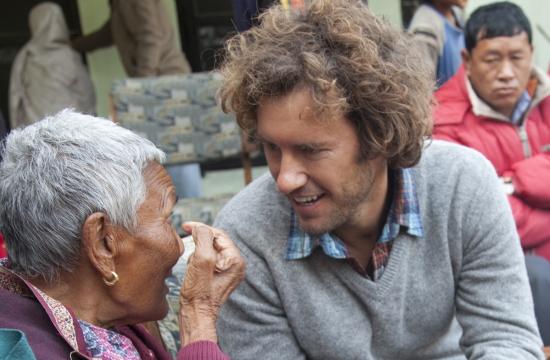 After months of speculation and rumors, Santa Monica-based TOMS announced it is taking a big step to expand into eyewear, starting with sunglasses as the company’s second product line. The expansion announcement was made at the Victorian on Main Street and Ocean Park Boulevard on June 7 in front of a booming crowd of fans and supporters, many of whom were sporting the company’s popular shoes – its first product.

Since its beginning in 2006, TOMS organization has donated a pair of shoes to someone in need every time someone purchased a pair of their shoes. This popular tactic was part of their One for One campaign. But TOMS is no longer just a shoe company.

On Tuesday, CEO and founder Blake Mycoskie opened a mystery box to reveal TOMS Eyewear. Keeping in line with Mycoskie’s founding vision, for every pair of sunglasses purchased, a pair will go to a person in need.

Mycoskie said during his travels, he found many people suffered from blindness from treatable causes, like cataracts. Because TOMS has been successful, Mycoskie felt it was time to expand.

“Today, we have a different vision,” Mycoskie said. “We are no longer a shoe company, and we’re not even an eyewear company. But we’re the One for One company and I thank you (supporters) so much for making it possible.”

By mirrormmg June 7, 2011
in Life and Arts
Related Posts