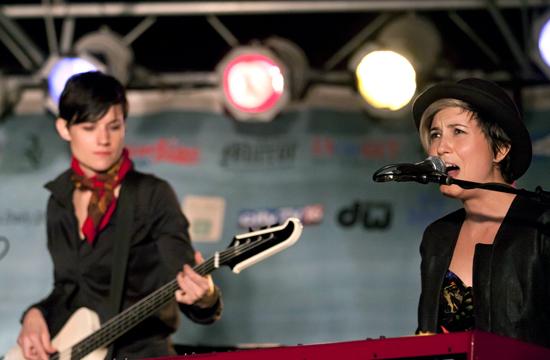 Australian musicians took to the stage at the third concert of the Twilight Dance Series on July 21 at Santa Monica Pier. Andy Clockwise played an outstanding set to warm up the crowd. Kim Churchill, a one-man folk band, was next in the lineup, followed by headliner Missy Higgens, who played her first ever co-concert with talented bassist Butterfly Boucher.

“I wanted to do a couple more songs to be honest,” said Clockwise after abdicating the stage to Churchill. “It’s on the ocean, there’s a roller coaster in the background, and it smells like chips.”

Jamie Douglass, drummer for Clockwise, summed up why it was so fun to play with him. “I think he has a vision and that’s always fun,” Douglass said. “I match his energy level and exceed it if possible.”

Churchill – a guitar-tapping, harmonica-playing, bass-drum-thumping genius – wowed the crowds on the pier and on the beach. “I like him because he can play four instruments at once,” beachgoer Samantha Noble said. “He’s also really cute.”

It took no time for 20-year-old heartthrob Churchill to get the crowd awing over his guitar skills, as well as his master over a cluster of other instruments. This was after Churchill surfed point breaks in the Southland all week.

“I’ve had about ten surfs in three days. Most of them in Venice, but tonight was special,” Churchill said. “The atmosphere out there was very beautiful and seeing this gives me a sense of fulfillment. To think that I was a part of the product to allow that to happen is very special and why I do this.”

After all those waves on the Pacific Ocean, Churchill poured his heart out to a crowd of thousands on the beach of Santa Monica. He played his hit song, “Truest Intentions,” and enraptured the audience. Some people on the beach even likened him to Bob Dylan.

“It makes sense,” Churchill said in a message the following day. “I’ve been listening to him since I was young.”

Beach balls flew through the air during his performance while children could be seen chasing bubbles made by a Garibaldi-bearded bubble guru called “Jim the Bubbleman.” In the midst of this surreal folk rock scene, the stage was set for Australian favorite Missy Higgins to come on stage.

Higgins played some of her top hits including, “Where I Stood” and “Scar.” During the song “Where I Stood,” fans crowded around the stage and sang along with the crooning artist.

“I have been a solo artist for years and this is my first live gig with Missy,” said bassist Boucher. “The first thing that hit me when I was on stage was the smell of the ocean… It was glorious.”

Boucher has found life easier after dropping A&N music label and her contract with music mogul David Geffen. She has even played with Sarah McLachlan this summer.

“I’m much happier that I’m on my own, independent label now and have gotten to play with Missy,” Boucher said. “At the end of every show it’s very exciting. It’s like meeting a new girl or guy. It’s an amazing feeling.”

By mirrormmg July 23, 2011
in Life and Arts
Related Posts