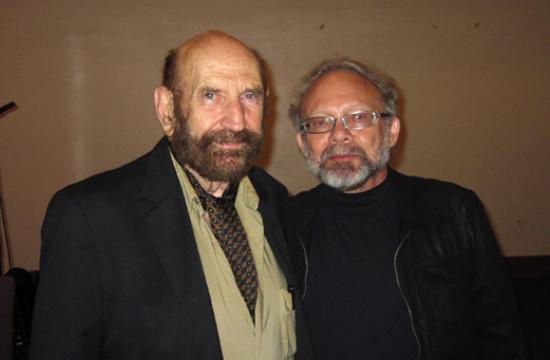 Brendan Constantine, emcee at the first annual George Drury Smith Awards banquet, looked out at the audience of poets and remarked “Poets like to receive awards in a setting that resembles their own apartment. When we bring them out, we are actually going to add several cats.”

It was a night that celebrated poets, as the venerable literary arts organization Beyond Baroque held its awards banquet and ceremony at Santa Monica’s Church in Ocean Park on July 17.

The church’s spacious nave had been chosen to accommodate a larger than usual number of attendees, with tables, a buffet dinner, and musical entertainment by the Tracy Newman band. But the atmosphere, if not exactly that of someone’s apartment, was somewhat like a high school reunion as poets greeted each other, embraced, laughed, and reminisced about their experiences with Beyond Baroque, which has been holding literary events and workshops since 1968.

As Constantine and Beyond Baroque Director Richard Modiano told the audience, the awards event was about community. The two honorees, poets S.A. Griffin and David St. John, were being honored not just as artists but for “their tireless service to the community.”

Suzanne Lummis, poet and founder of the Los Angeles Poetry Festival, presented the first award to Griffin for “Distinguished Service,” She told of how the awards committee struggled to come up with a memorable name for this award. Some suggestions were “Heroic,” “Innovative,” “Champion,” “Fleur D’Baroque,” and “Palme D’ Baroque.” After much discussion, the most suitable adjective found to precede the word service was “distinguished.”

S.A. Griffin is a poet and actor who has distinguished himself over the years with his contributions to Los Angeles poetry including books through his own Rose of Sharon press; a newsletter-type magazine; poetry tours with poetry performing groups the Carma Bums and White Trash Apocalypse; a solo poetry tour with an actual discarded bomb full of poetry, known as “The Poetry Bomb;” and the organization of several marathon readings at Beyond Baroque.

“I’ve never been good at speeches,” Griffin said as he accepted the engraved plaque and goodie basket from Lummis. He admitted that he didn’t know how it happened that he was receiving this award but was “honored to be with you tonight.” Among the many whom he thanked were Beyond Baroque founder George Drury Smith, the partners with whom he had collaborated on organizing readings and tours, and his wife Lorraine Perotta, “a librarian and avid reader.”

“I couldn’t keep going without her help,” said Griffin.

Smith, a former Santa Monica High School teacher, came to Los Angeles in 1964, hoping to join the Venice Beat poets but found their scene drying up. Nevertheless, he worked to start a literary magazine, which he put out on press in 1968, the same year that he rented a storefront on what is now Abbot Kinney Boulevard in Venice to house the first Beyond Baroque space.

Smith recounted this story and some other observations on the long history of Beyond Baroque, its move to the Venice City Hall, the various boards that have come and gone, the many events, the fight to maintain Beyond Baroque’s lease on the City Hall. He then introduced St. John, who was receiving an award honoring his excellence as a poet, mentorship of other poets, and devotion to Beyond Baroque. The award was named for Smith.

St. John came to live in Venice after he heard about Beyond Baroque while in college. A poet with a vast output of books, magazine publication, and awards to his credit, he is also credited as a teacher and mentor to many local poets.

“I think of his work as mercilessly hewn from the raw material of life, hammered out into objects of beauty,” said Smith.

He noted that the writing of poetry “is solitary—it begins and ends alone. Yet some among us rise and say ‘It does not have to be this way. It can be a community.’ “

By mirrormmg July 22, 2011
in Life and Arts
Related Posts