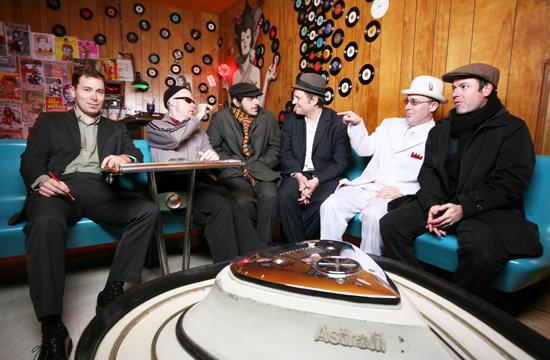 Cool cats bring your pork pie hats to jump and skip along with five modern Ska bands performing at the Santa Monica Pier during week four of the Twilight Dance Series on July 28.

The theme for the evening features finalists from Rusty’s Surf Ranch Emerging Artists Competition. Battle of the bands begins at 6:45 p.m. with a string of musicians mixing together multiple genres of music and fusing it together to fashion a modern interpretive Ska venue.

The bouncing will commence with The Bad Bad Things.

“The name of our band actually came from a Chris Isaac song we liked called, “Baby Did a Bad Bad Thing,” said bassist Nate Waxler. “We play punk rock fiesta music with bits of reggae folk.”

Waxler’s bluesy punk rock band has had people rocking on floors all over the Southland this last year. They hope to make their Westside presence known during the Ska fest.

The band is planning to play a song inspired by the punk band The Descendents entitled “There Will Be Blood,” which sums up their hardcore youth attitude.

“Even though we only have fifteen minutes, I know this will be a fun-filled show with lots of energy,” Waxler said. “I was eleven years old when I first saw Dick Dale. From there it was pretty formative for me and I knew what I wanted to do was to make music.”

Waxler plays a black and white Fender P-bass loaded with stickers. He sticks to his simple walking melodies to structure his band, along with the singing of siren Kryss Deetch.

“Kryss has such a huge voice,” Waxler said. “Along with Aaron Sim, our lead guitarist, we know it’s going to be a good set.”

Olio, the second band in the lineup, is scheduled to start their 15-minute performance at 7:05 p.m. but a more realistic time after breakdown and set up could move their performance to start at 7:15 p.m.

“We are a high energy band that gets you moving right away,” lead singer and guitarist Arif Hodzic said. “We are super excited to play at the pier.”

Olio consists of an all male trio that won the Honorable Mention Award at the 2008 West Coast Songwriters’ International Competition. They plan to play their new and unreleased songs, “Come Back Kings,” “Saturday Night,” and “Caught Up” to accompany their hit song, “One Last Goodbye.”

“We’ve done lots of gigs where people break into interpretive dance and do their thing just having fun,” said Hodzic, who plays a custom Telecaster and is big on pulling sounds from lots of different influences. “We’re from three different backgrounds and we come together beautifully. We got that groove element mixed with funk. Combine that together and what you have is a dance-ability that makes you move.”

Olio is keen to express a positive message in music where everybody deserves to be happy. “Our album ‘Living the Dream’ is about everybody having their own individual ideas,” Hodzic said. “That’s really the key.”

A quarter of an hour later, Down Home is scheduled to play their fifteen-minute set at 7:30 p.m.

Blonde, pigtailed pianist Phoebe Elliot casts an enormous presence as a vocalist on stage. “We are lucky to have her,” bassist Greg Cahill said. “We found her singing and playing her piano at a showcase in Hollywood and now she is part of our band.”

Elliot mixes her harmonies and melodies with guitarist Remy Krumpak in duet style and focuses on expressing her inner feelings with a rich warm western style voice.

Neophytes to the band scene, they just started to play together last summer.

“Come to think about it, our first show was actually at Rusty’s,” Cahill said.

Down Home is planning to play a crowd favorite called “Build This Love.”

“We’ve dedicated ourselves to music,” Cahill said. “We’ve gotten to the point where we bounce an idea off somebody’s head and then they’re spinning gold with it.”

Starpool is planning to go on around 8 p.m. and combines heavyweight members of two groups of the ‘90s Ska scene. Starpool mixes early No Doubt co-singer Alan Meade with instrumentalists from the band formerly known as Save Ferris. This classic American Ska band promotes themselves as Jamaican Rock and Roll.

“With this project, what we all have in common is making music together,” guitarist Brian Mashburn of Starpool said. “We have roots in the Ska scene and the difference is that we add in extra mixes making us more rock and pop with a bit of soul around that element of Ska.”

Instrumentalists of the band met with Meade in 2003, cutting a few songs before going on hiatus and reforming in 2007. Since then they have been touring and sending patrons ska-skanking wherever their feet happened to land.

Starpool is planning to play “Start Again,” off their “Living in Transition” album as well as their first hit single, “It’s Alright,” from their 2003 self-titled album.

Headliners The Slackers will most likely begin late. They are scheduled for 8:45 p.m. but a better guess due to multiple band change times puts them to go on around 9 p.m. and continue until 10 p.m. They are the most classically styled Ska band in the venue and will be playing some Reggae inspired guitar.

“We’re a Ska band in the sense that Ska is our starting influence,” saxophonist David Hillyard said. “We take other influences such as reggae, soul, English rock n’ roll, and a little bit of Latin music to create that Slacker sound.”

Hillyard plays a Coeus Super 1 tenor saxophone to help formulate his band’s original Ska sound. “I took saxophone lessons five minutes away from the Santa Monica Pier when I was a kid so I’m really looking forward to playing the set.”

The Slackers are planning to play the lively, “Have the Time,” off their 1998 album “The Question.” Their latest original album, “The Great Rock City Swindle” was released in 2010.

“We are celebrating our 20th year and this band’s become the center of my life besides my family,” Hillyard said. “We try to be like an old rock and roll review. We give you a shoe. We don’t just stand there and stare at our own.”

By mirrormmg July 27, 2011
in Life and Arts
Related Posts