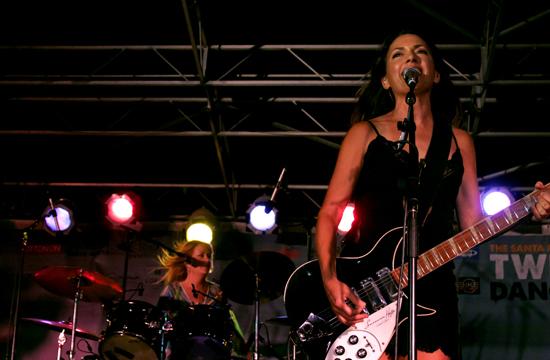 The Santa Monica Pier’s Bastille Day installment of the 37th Annual Twilight Dance Series landed with a bang Thursday night when ‘80s pop sensations The Bangles returned to their hometown for a triumphant romp through their catalog of jangly, harmony rich hits.

Guitarist Susanna Hoffs, guitarist Vicki Peterson, and drummer Debbi Peterson, along with their band, delivered their music with good-natured aplomb in front another record-breaking crowd on the pier and the adjacent beach. All three ladies are excellent lead vocalists and their tight, three part harmonies were featured heavily in their more than an hour long set that included their chart toppers “Manic Monday,” “Hazy Shade of Winter” and “Walk Like An Egyptian.”

Not content to rest on their laurels, The Bangles debuted two cuts from their upcoming album, “Sweetheart of the Sun,” out this September on Universal imprint, Mono Records. An engaging cover of Todd Rundgren’s “Open Your Eyes” and a new original tune “Under A Cloud” slipped seamlessly into their set, that also included “Goin’ Down To Liverpool,” a tribute to The Beatles.

Throughout the Bangles set, the crowd was enraptured with the nostalgic music, roaring their approval and singing along with most of the selections. Even the fortysomething men in the audience seemed to know the words to every song from the ‘80s and wailed away unselfconsciously in unison with their female companions. Encore “Walk Like An Egyptian” had the crowd pumping their arms at odd angles and The Bangles slipped in a sliver of The Who’s “Magic Bus” in between verses of their signature hit, rocking the house off into the night.

Earlier in the evening, the crowd was treated to a thoroughly engaging opening set by the French Canadian band Caracol, in town for their U. S. debut.

Lead by singer/guitarist Carole Facal, the group also featured lilting four part harmonies in a set that was divided equally between French and English lyrics. Facal’s lead vocals and the harmonies of bassist Amelie Mandeville, singer Audrey Michele Simard and guitarist David LaFleche soared over the crowd on the pier as they moved through songs from their most recent release, “L’Arbe Aux Parfums.”

The quintet was rounded out by drummer Joseph Perreau, manfully supplying the pulse on a stripped down kit of only snare, floor tom, hi-hat, and crash cymbals.

Caracol’s music draws from many diverse sources, including French Chanson, American Folk, Jamaican Rock Steady and vintage Rock ‘n’ Roll, but their sound is unique and equals more than the sum of its parts.

Facal’s French and English lyrics engage the darker sides of human emotions, but not without touches of wry humor. The accompanying music is bright and driven, making for a thoroughly modern take on the exigencies of life. Moving between acoustic and electric instruments over the course of their set, Facal and guitarist LaFleche both folked and rocked the music with changing colors, textures and sounds, holding the crowd’s attention with ease even on the songs in French.

After their set, Perreau and Facal talked about what a thrill it was to be performing in front of such a large audience. Although they routinely tour French Canada and Europe, their performances are often in small clubs, so the sun drenched setting of the pier and the enthusiastic response of the swelling California crowd was a career high.

Check out their website, (caracolmusique.com/en/) for more on this refreshing sound from these charming neighbors to the north.

By mirrormmg July 15, 2011
in Life and Arts
Related Posts