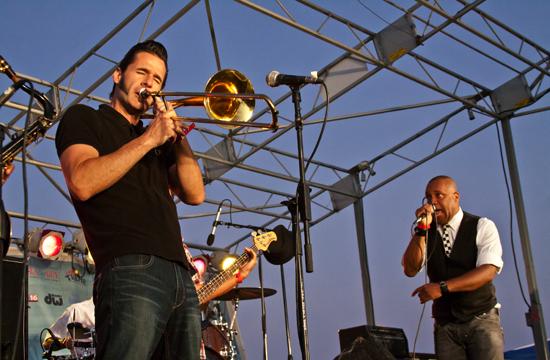 The fourth night of performances at this summer’s Twilight Dance Series featured a quintet of bands at the Santa Monica Pier headlined by The Slackers and Starpool, but opened with a competition of local bands battling for a chance to return to the pier on Sept. 1. Sponsor Rusty’s Surf Ranch decided which of the three bands would be invited back to for the ninth Twlight Dance Series concert night via crowd reaction.

The Bad Bad things were the first in the line-up.

“I didn’t know what to expect but I just went in and did it,” said lead guitarist Aaron Sim.

People could be seen clapping during the set and rooting on The Bad Bad Things as they played, “There Will Be Blood.”

“I had a ball,” said The Bad Bad Things singer Kryss Deetch.

Many people took advantage of the waning summer sun to soak in the last of the day’s rays and picnic on the beach. Whitney Warren saw the free event as a cost-saving opportunity to watch the bands and thank her co-workers holding “appreciation night.”

Atop a king-sized white blanket anchored by candles that had been placed along its edges, she passed out a variety of sandwiches, chips, and cupcakes to her thankful colleagues.

“I liked Kryss, she was cool,” Warren said as she poured herself a cup of coffee. “Olio is a different style but I liked them too.”

Mirroring a racecar pit crew, the Bad Bad Things and Olio bands switched their gear under the professional supervision of the Pier Restoration Corporation heads.

“The set change between the Bad Bad Things and Olio was one and half minutes,” said Kurt Ross proudly at the event.

“Kurt Ross is our production manager and Scott Ferguson is our stage manager,” said event producer Martin Fleischmann. “They did a stellar job under difficult conditions and we are lucky to have them.”

“Everything was very punctual,” agreed Nate Waxler, the bassist for the Bad Bad Things.

Olio was next, the band playing a hard type of airtight pop music that appealed to many in the diverse crowd. They won the battle of the bands competition and will return to the Twilight Dance Series on Sept 1.

“I’m honored, thankful, and grateful that we can come once again and share what we do,” said the jubilant Olio front man Arif Hodzic. Runner up, The Bad Bad Things, will be playing that same night at Rusty’s Surf Ranch, which is also located on the pier.

Third place went to Down Home, whose members also said they enjoyed playing at the venue even though they didn’t win the competition.

“The beach is right in front of the view of the ocean and everyone here was focused on the music,” Down Home bassist Matt Ross said. “That’s what we loved.”

“This is really all you can ask for in life,” Krumpak said of his lead part in the serenade sung to the various couples on the pier and beach.

“I like how they infuse that soul sound,” said pier attendee Patrick Ryan Campbell who had been rooting for Down Home to win the competition.

“It was really beautiful,” said Down Home co-singer and pianist Phoebe Elliot.

After Down Home ended, crowds swarmed onto the pier. Like clockwork, Starpool started on time at 8 p.m.

“It’s time to dance!” shouted Alan Meade over the microphone during the beginning of Starpool’s set. Meade got interactive by the middle of the set. He jumped offstage, and took his mike with him into the crowd. The pier was teeming with attendees by this point and the beach below was full making this midsummer event arguably this year’s most-attended of the weekly summer concert nights on Thursdays.

Starpool’s trombonist, aptly named T-Bone Williams, used his slide techniques to the pleasure of the crowd. He popped off his slides registering high pedals with ease and lip-sluring on his trombone.

“T-Bone Willy has been my nickname since I was a little kid,” Williams said. “People always seem to remember me because of my nickname.”

Starpool even covered a ska version of the 1959 Isley Brothers song, “Shout,” to the pleasure of many in attendance.

“It’s always nice to get out of the club element and onto the beach,” said Meade after Starpool’s set. “These guys are my best friends. Even when I was with No Doubt, we knew each other. Sharing the stage with them is a privilege.”

Saxophonist Eric Zamora of Starpool was impressed with the security at the venue.

“I was so impressed with the security and set changes,” Zamora said. “It was very professional. I’m so glad the City of Santa Monica provides it and the community should take advantage of it more.”

By the time the Slackers started on time at 9 p.m., a 12-foot man atop stilts, dressed as a tree, could be seen towering above the highly charged ska-skanking revelers swimming through the crowd in packs. In ska lines they circled around this gigantic Treeman, ska-skipping in a follow the leader order.

The self-described, “plant like being,” and “reflection of nature,” Treeman waded his way on stilts- hidden by bark-colored pants- through the beach area and onto the pier.

All members of the Slackers onstage were clad in black suits many offset by white ties except for bassist Marcus Geard who wore a white suit with a black bow tie. Reggae keyboardist Vic Ruggiero wore a black pork pie hat and took a good amount of the vocals along with trombonist Glen Pine.

The Slackers hit song, “Have the Time,” had the sea of people on the pier moving in various directions, each doing their own interpretive dance of swaying, grooving, and bouncing. At one point, after an encore set was demanded by the audience and there was time to spare, Slackers brass Pine and Dave Hillyard could be seen playing their instruments and became engulfed inside the crowd.

“It was mind-blowing,” said Pine. “Everybody was dancing and having a good time. We had a blast.”

Ruggiero had a similar opinion. “It’s cool man,” Ruggiero said about his performance on the Pier. “It’s just another day for the Slackers.”

By mirrormmg July 29, 2011
in Life and Arts
Related Posts