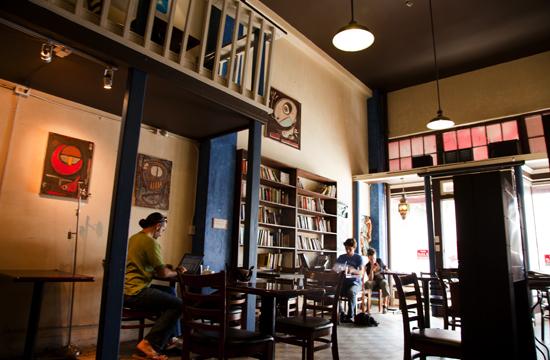 A man dressed like a pirate sits sipping on a cup of coffee – if a passerby stares long enough, he will simply “arr” at them and continue sipping, as if the coffee were rum.

At a table nearby, an aspiring musician quietly strums chords on his guitar, perhaps in the midst of writing a new hit. Inside, a woman pounds away on her laptop, hoping to finish her latest piece of writing before the night ends.

There is no “typical” crowd of customers at 212 Pier Avenue café off of Main Street. The eclectic coffee shop, which replaced Novel Café in 2009, is home to everyone and anyone who seeks a hideaway from the hustle and bustle of often-crowded Santa Monica.

Employee Chloe Sinclair, who has worked at 212 Pier since February, said she was drawn to the coffee shop for that very reason.

“I think it’s one of the only places that still has the Venice vibe without being too bourgeois,” she said.

Sinclair said she always went to the café to study for her finals at UCLA and wished she could work there.

“[So] one day there was a ‘Help Wanted’ sign at the door and a week later I was working here,” she said.

Sandwiched between a spa, hat and used bookstore, the café’s hole-in-the-wall location is one of the many reasons it appeals to locals.

Guru Thapar, Pier manager, said in an email interview that his biggest goal for the cafe was to clean up the cafe and make it more affordable.

“I live above the cafe and there are 80 units in total in the apartment complex, no one from the building would go to the cafe,” he said in an email. “I really wanted the cafe to be a long hang, so I had to re image the cafe as a place where you could go and hang out with your friends, read a book or just get work done without being harassed.”

Art by local artists, which changes every few months, is plastered above sky-high bookshelves stocked with books, each for $5 or less, ranging from “Guns, Germs and Steel” to travel books. Music also varies — everything from oldies to Spoon blares from speakers just loud enough for people to hear but quiet enough to maintain a productive environment. The café is also home to aspiring performers – every Thursday at 9 p.m., the café holds an open mic night for comics, musician, poets, and spoken word.

Patrick McCarthy, a Santa Monica resident, said he has been coming to the location since 1993, when it was still Novel Café.

“I guess my favorite part is the ambiance,” he said. “Just the fact that I can come in and not be bothered and put my head down and get some work done. And it’s not a scene, which is really nice because everything is a scene these days… and it didn’t used to be this way in the neighborhood.”

McCarthy said Santa Monica is less “mellow” than it used to be so 212 Pier provides a perfect secluded place to do work.

“You can’t even go to a neighborhood bar or coffee shop without waiting in line anymore,” he said. “So it’s nice to have a place that’s the same that it always has been.”

“The street life is a little odd around here… and there’s a big mix of people that come to Pier,” he said.

According to Mansfield, Pier café even has a bouncer on some nights starting at 9 p.m.

“[The bouncer] is a unique character that keeps things in order, it’s kind of necessary,” he said.

For example, Mansfield said, there’s a friendly old woman who hangs out at Pier sometimes, but as soon as the bouncer comes she runs.

“Apparently she’s not supposed to be here,” he joked.

Mansfield said aside from seeing “pirate guy,” who is “always good for a laugh,” one of the weirdest things he’s witnessed at 212 Pier is a routine some of the regulars do.

“People that spend a long time here they have this little thing where they watch out for parking meter people and whenever they come, a bunch of people run up and down and put quarters in everybody’s meters,” he said.

But the best part about the café?

“There’s always someone to talk to here,” Mansfield said.

By mirrormmg August 18, 2011
in Life and Arts
Related Posts