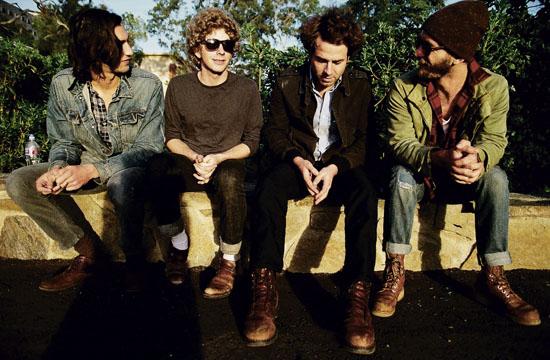 Sing along, sway, and come to grips with the natural progression of life as a trio of earthy American artists enlighten the Santa Monica Pier during week nine of the Twilight Dance Series themed “Americana Night” this Thursday, Sept. 1, which focuses on the transition of adolescence as it unravels into adulthood.

Olio will open the free evening event that will shine up on the opulence of the returning seven foot, six inch by 12-foot large LED screen donated by Screenworks for the night.

Band Sonny and the Sunsets are set to hit the stage at 8 p.m. with Dawes headlining at 9 p.m.

“We’re really excited,” said Arif Hodzic, front man for the band Olio. “It’s going to be really fun. Dawes is really good and they remind me of The Eagles. They’re mellow.”

Olio won Rusty’s Surf Ranch Battle of the Bands during week four of the Twilight Dance Series, which secured its spot to open for Sonny and the Sunsets and the Dawes. Olio’s airtight pop rock song, “One Last Goodbye,” cemented its victory and gave the band an opportunity to return and play again this coming Thursday.

“It’s just another opportunity for us to open up for Dawes,” said Hodzic. “It should be fun. We have a different type of energy.”

Olio takes inspiration from bands like John Cougar Mellencamp and Tom Petty as well as having a good respect for bands like Dawes.

“I think that we approach songwriting in the same type of way,” said Hodzic. “We have American music as an influence (along with) other elements infused with that style and are more of a hybrid band.”

When Sonny and the Sunsets hit the stage at 8 p.m., lead singer and guitarist Sonny Smith said the audience would hear “stripped-down rock and roll” music, as he describes it.

Sonny and the Sunsets’ hit songs “Death Cream,” and “Planet of Women” from the 2009 album “Tomorrow is Alright” is sure to bring a vibe fitting the flower power fashion for the thousands of barefooted attendees to move and groove on the sand.

When Sonny Smith isn’t performing or writing music, he is absorbed in writing and drawing comic books.

“I’m excited to jump in the water,” said Smith about the upcoming gig at the Santa Monica Pier.

Smith said he has many friends who draw comics and cartoons, which he has featured in his videos.

“I have made friends with lots of comic book artists who have done videos for me,” Smith said.

The cartoonish video of Sonny and the Sunsets’ song “Too Young to Burn,” also off “Tomorrow is Alright” was inspired by an old high school educational film about the dangers of kids doing drugs.

“Too Young to Burn” is “about not letting yourself get too old, becoming a burn out, and not continuing to be an adolescent your whole life,” said Smith. “It’s about finding something in the middle.”

He plans to play this song as well as others from his 2011 “Hit after Hit” album at the pier next Thursday.

“I wonder what life is,” Smith said, reflecting on the meaning of it all. “I am chill on the outside and a complex mechanism of nerves and strategies on the inside.”

Headliners Dawes will step on stage at 9 p.m. and attempt to answer that question.

Dawes’ hit song “When My Time Comes” was used in a recent Chevy Silverado Truck Commercial, which has increased the band’s popularity.

Dawes’ songs are about coming to grips with growing up and discovering the truth about becoming an adult. The lyrics offer subtle and unforgetable advice and incorporate the shackled dreams and creativity of one’s youth.

Dawes’ success lies in its ability to capture many stories in a single song. The band recently performed “Time Spent in Los Angeles,” on “Late Show with David Letterman,” at last year’s Newport Folk Festival, and they’ve been busy on the road performing ever since.

By mirrormmg August 31, 2011
in Life and Arts
Related Posts