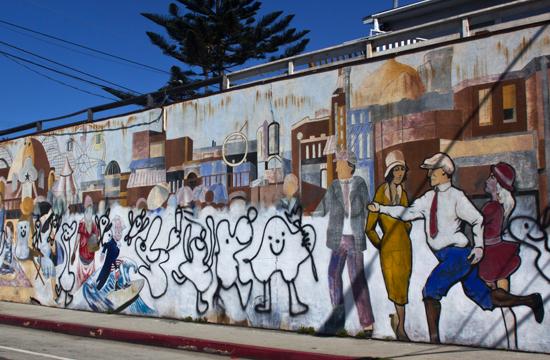 “Public art is so 2, 500 B.C.!” exclaimed Lucy Blake-Elahi as she introduced the panelists at “Public Art, Expression of Community Voice.” The event, held at the Santa Monica Main Library on July 28, and sponsored by Senior Arts Foundation, featured three artists (plus Blake-Elahi, an artist and art history instructor at West Los Angeles College) speaking about their experiences with public art and what it means to them.

Blake-Elahi’s comment referred to her realization, while teaching art history, that much of the earliest art was indeed public-monuments such as the pyramids and Stonehenge and ancient temples. Blake-Elahi defined public art as “art in any medium, as long as it is publicly accessible. If visual, it is often site-specific.” There is also community involvement, both in terms of creativity and funding.

Each of the artists showed slides of his/her work as they talked about the public art projects they had created or collaborated on.

Francisco Letelier, a Chilean-born artist who now lives in Venice, has worked as an artist for 25 years and is also known for writing and spoken word performances. His public art works include “Reflecting the Light,” an indoor mural at Whole Foods Market in Venice, the Sun and Moon tile murals at Metro’s Westlake MacArthur Park station and a mural on the side of the Pioneer Bakery in Venice.

Letelier’s life experiences have given a political stance to his work.

His family left Chile after the 1973 coup and his father, Orlando Letelier, was killed by a car bomb in Washington D.C. in 1976. After that, Francisco began his art career by joining his brother Jose in the “Brigada Orlando Letelier,” a mural-painting group that traveled to various American cities to create public art.

“There’s a great power in the collective act of creation,” said Letelier. “It’s often messy.” Artists, he observed, are accustomed to working alone. But in working in collaboration on public art works, they can be open to discovery.

As an answer to a question from an audience member about the attitudes toward controversial art, Letelier said he believed that both positive and negative responses to art are a good thing.

May Sun, a painter, sculptor, and photographer born in Shanghai, created two public art projects for Metro – the colored tile décor at the Hollywood and Western Metro station and in collaboration with Richard Wyatt, “City of Dreams, River of History” at Union Station.

While working on her installation for the Santa Monica Museum entitled “LA/River/Chinatown,” Sun learned that Chinatown’s original site had been moved in order to build Union Station. This led to her using artifacts from the old Chinatown site as materials in her contribution to the Union Station installation, “River of History.” The artifacts, such as old bottles, are incorporated into the “river bed” on top of a tile-decorated “river bench” in the eastern lobby of the station. Sun also paid tribute to the river with floor paving elements that refer to native plants and animals, and with an aquarium with faces of native and Latino residents of Los Angeles etched in the glass façade.

Pat Warner comes from the eastern U.S. and has lived in Southern California since 1982. “I think of myself as collaborating with nature,” she said as she showed slides of her outdoor sculptures that grace various parks. Made mostly from wood, they range from an octagon constructed from firewood to a tiny house painted with depictions of flora and fauna. Warner has also contributed to rapid transit station art with her nature-themed decorations for the Pierce College/Winnetka Orange Line station.

Blake-Elahi also showed slides of her public art works. Interested in Ballona Creek, she has been an activist for preservation of the Ballona watershed and her public art work includes a mosaic and two sundials in Culver City Park that pay homage to the creek. She also has painted decorative traffic medians for various Los Angeles streets.

Audience members expressed their excitement about public art during the Q and A period that followed. One man commented that he thought there should be some public art at Main and Marine Streets, the southwest entrance to Santa Monica. He wanted to know if any of the artists would want to create some kind of “welcome” art there.

“Go to your government,” said Blake-Elahi. “Santa Monica has an Arts Commission. Tell them you’d like to see more public art. Put it in writing.”

By mirrormmg August 2, 2011
in Life and Arts
Related Posts