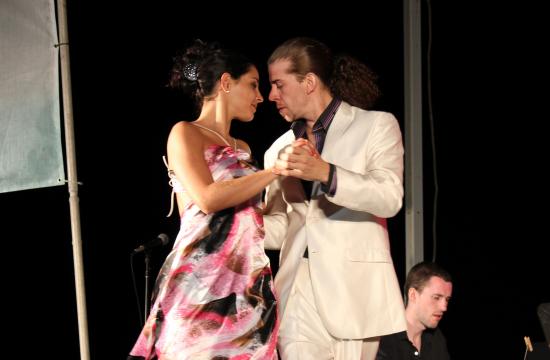 The eighth night of performances at the Twilight Dance Series rolled out the dance floor Thursday to a warm breeze on the Santa Monica Pier for Milonguero styled tango dancing with live music from big band Milongatron.

Free dance lessons started at 6 p.m. with professional Argentinian dancers Cecilia Piccinni and Lucas Molina Gazcon who showed the basic moves to those wanting to learn tango, which was practiced to a smooth DJ beat.

Milongatron started their live performance at 7 p.m. to a large and receptive dance crowd and played for the entire night.

“The tango is about control and is just like life,” said Argentinian Tango dance instructor Isabelle Pampillo of Isabelle’s Dance Academy. “Many American women are the boss at home. In tango, it’s a change to surrender and let the man lead.”

“There is a need for what is authentic,” said Pampillo. “With partner dancing there needs to be a willingness and necessity to surrender and follow the lead.”

In tango, Pampillo said the man should lead and the woman had to release her desire to be in control and follow the man.

“If you really let the man lead, he’ll take you to heaven,” said Pampillo. “Something in their being tells them they have to dance.”

Shana Miller, a physical therapist and dancer who attended the event, said she had a wonderful time.

“I enjoyed that it was outside and appreciated the whole beach scene,” she said.

Miller began as a dance student at Isabelle’s Dance Academy and attends multiple milongas weekly across the Santa Monica area.

“We (dancers) have formed our own sense of community,” Miller said. “It’s a passion. We all look forward to seeing each other and connecting.”

For Miller, dancing has become a great passion and it now plays a large role in her social life.

“I meet so many people whenever I go out dancing,” Miller said. “Dancing has become an important part of my life and I love it.”

Miller and Pampillo, both who dressed fancy for the occasion, continued to dance all night long with their partners to the honeyed sounds of Milongatron.

Milongatron kept the milonga flowing by playing an accordion like instrument called the Bandoneón to accompany mellifluous big band instruments such as the cello and keyboard.

Dancers Gazcon and Piccinni took to the main stage a little after 9 p.m. and tangoed to a number of songs performed by Milongatron.

The pair has toured the United States for more than a month and performed in a variety of other venues across the U.S. such as New York and Chicago.

Gazcon and Piccinni fly back home to Argentina this Tuesday.

“It is my first time in Los Angeles,” said dance maestro Gazcon, who wore a white suit to the event. “We were surprised because they (amateur dancers) were super. There were almost eighty couples dancing.”

The crowd cheered loudly at the end of the final song when Gazcon dove into the tantalizing Piccinni and she responded elegantly by lifting her right leg holding the tantalizing pose for a few moments enmeshed inside his consummate embrace.

By mirrormmg August 26, 2011
in Life and Arts
Related Posts