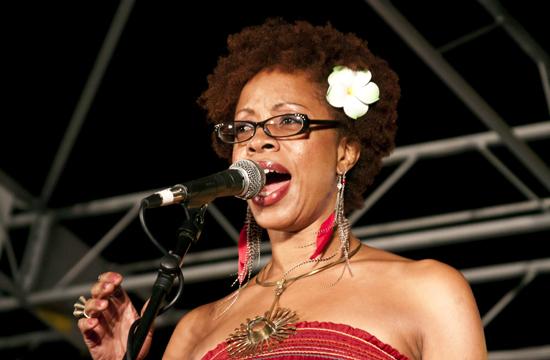 The fifth night of performances at the Twilight Dance Series included two chilled out bands at the Santa Monica Pier headlined by the jazzy rock of Nelson Garcia Marquez and the Moderators. Reggae pop of Tutu Sweeney and the Brother’s Band opened the evening, which was all in support of local organization Heal the Bay.

“It’s a beautiful day to play some reggae on the beach,” Sweeney said over the microphone. “When I was younger, I used to come in the front row and watch the bands play. I hoped I could play here one day.”

Sweeney got his wish and performed in front of a crowd of receptive attendees.

His bandleader jacket was decorated with gold buttons and he wore it over a red shirt and topped it off with a black “Brothers Band” hat. Sweeney’s iconic jacket happens to be a hallmark of his clothing style.

“I was on my bike when I passed this thrift store and I saw the jacket,” Sweeney said. “I added the medallions later. The turtle on my shoulder reminds me to chill out and the smiley face reminds me to be happy.”

On the left collar of this crisp double-breasted jacket, a gold pin in the shape of a trumpet was fastened. Sweeney reminisced about the gold brooch and explained how it symbolized the development of his vocal technique.

“Playing the trumpet takes a lot of air and is similar to singing,” Sweeney said. “You have to find the pitch.”

Twenty-one year old Sweeney grew up in Venice Beach and is the product of The Academy of Music at Hamilton High School in West Los Angeles. At this magnet school, he earned an official Academy of Music Gold Seal on his high school diploma.

“I started playing the drums when I was four years old because I loved hitting things,” Sweeney said. “I picked up the trumpet in middle school and I practiced night and day. The trumpet really opened my mind to jazz and foreign music.”

Sweeney played most of his reggae pop music on a keyboard to shape the flow of his band while he sang. Sweeney hit some high notes during his song, “Under the Waterfall” to the delightful cheers of the crowd.

“I love playing music outside,” Sweeney said of his performance. “I love breathing the fresh air and playing to the water and to the sky.”

During intermission, representatives of Heal the Bay held a brief yet informative session about how people could preserve their local environment and keep the beach clean. Heal the Bay’s most pressing issue includes a ban on the sale of all shark fin meat currently being sold at local restaurants.

“We are asking people to call senators and show their support for California Assembly Bill AB376,” said Sarah Sikich Coastal Resources Director for Heal the Bay. She wore a homemade shark hat in support of the cause along with many of her colleagues. “People can visit our website and sign an online petition to help support the bill.”

Then headliner Nelson Garcia Marquez and the Moderators took to the stage and ushered in some sounds of smooth easy-going music.

Like Sweeney, Marquez grew up in Venice Beach and received acclaim for taking roles in movies such as “The Lost City,” where he played the character “Machado” alongside supporter and mentor Andy Garcia. On stage at the Twilight Dance Series event, Marquez focused on the full-bodied sounds of his self-styled “jazzy rock.”

“I’ve known Nelson for a few years from dance circles,” backup singer Nichelle Monroe said. “I liked playing outside a lot and I enjoyed playing my first show with him.”

“They’re really mellow,” said Daisy Llamas in response to his song, “Top of the World.”

Even though the music was “mellow,” the music Marquez and the Moderators played proved to be quite danceable.

Even a twelve-foot tall Treeman atop stilts could be seen getting a groove on. This “reflection of nature,” could be seen dancing and getting down with a number of people who had joined in the dance and had coalesced to listen to the Latin star.

“We’re literally within the elements,” Marquez said. “We’re standing on the ocean while people are sitting on the sand. This is beautiful. It’s analog to being in the ocean and I value my time here.”

By mirrormmg August 5, 2011
in Life and Arts
Related Posts