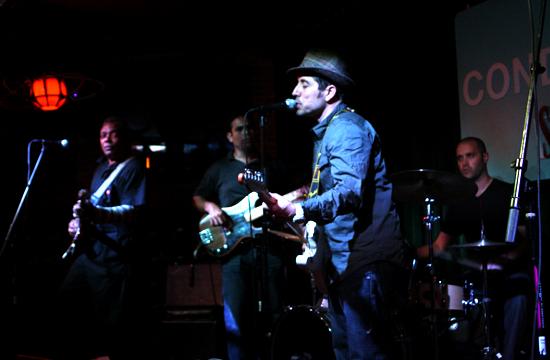 Just chill out or bob and groove at the fifth installment of the Twilight Dance Series, the free weekly concerts taking place at the Santa Monica Pier Thursday nights from 7-10 p.m. On Aug. 4 Cirque du Soleil will present the theme “Heal the Bay,” to usher in the smooth sounds of jazzy rock and reggae pop.

“It’s really an honor to play at the pier,” said Nelson Garcia Marquez, an artist of Cuban descent who grew up in the neighboring city of Venice. “I’m proud to be a part of it.”

Tutu Sweeney, who also grew up in Venice, will be the first of the two artists to play and will be sharing the evening venue with the Latin musician.

“I grew up in Venice Beach and I used to go to the Twilight Dance Series as a kid,” Sweeney said.

“From a young age, playing music is what I wanted to do and I stuck with it,” he continued. “I have a very open mind to different types of music and what I want is for everybody to feel the love.”

Twenty-one-year-old Sweeney, an artist of Ethiopian and Irish heritage, plans to play “Under the Waterfall,” along with his reggae pop serenade, “Lovely Lady,” and eight other songs during his hour-long show.

“I play pop music that has a rock edge mixed with reggae and old school pop,” Sweeney said. “I tell stories through my music.”

Sweeney combines an upbeat reggae beat on his keyboard and mixes it with pop vocals and walking bass lines. “I use my voice along with my keyboard to do it.”

Sweeney just returned from a US tour where he opened for Aloe Blacc and The Grand Scheme along with his brother Te’ Amir. He is confident about his upcoming performance at the Twilight Dance Series.

After Sweeney’s set is over, Latin artist Marquez will start his “jazzy” rock show.

Marquez has been playing music and acting for almost two decades. He landed his first Hollywood role in 1995 in “Steal Big Steal Little” starring Cuban born actor Andy Garcia. Ten years later, he starred in another film with Garcia, playing the role of Machado in “The Lost City.”

He contributes much of his success to Garcia, who has starred in the highly popular mobster movies “Godfather III” and “The Untouchables.”

“Andy Garcia has been a good friend and example of someone who is able to keep a healthy and happy family life,” Marquez said. “The success he’s had in his career has shown me that this is possible and he’s very supportive of my music.”

With Garcia’s support, Marquez has moved on to a different phase of his life and has recently made a name for himself as a musician. A few years ago he could be found touring the Venice Beach area playing with the band, “Mango Bang.” Since going solo, he has played at The Hollywood Bowl, appeared on “The Late Show,” and was featured on “Telemundo.” His song, “Top of the World,” reflects how he feels about his success.

On stage, Marquez plays a piña colada-colored Telecaster guitar that is accented by a mint green pickguard. He calls the cream-colored string instrument “Coconut.”

Marquez, along with “Coconut,” is set to offer up his music to all who camp out on the beach or dance to his mellow music on the pier.

“Our music is jazzy, not jazz,” said Marquez about the sound of his band. “The music we play is Latin funk and soul and it would be a stretch to call it jazz. Our music is more like groove music, people’s music.”

Marquez feels fortunate that he was able to record six albums in 10 years with late Cuban bassist Israel “Cachao” Lopez.

“It’s a total blessing I was able to record with him,” said Marquez about his decade of musical experience with the legendary Mambo inventor.

Both Marquez and Sweeney are playing their music in support of a cleaner beach and ocean. Concertgoers will be reminded of this during the event.

“It’s a fantastic backdrop and ideal setting to remind people to protect the ocean and beaches,” said Matthew King, communications director for Heal the Bay. “This event will let people know in a light-hearted way what they can do to lower their impact on the environment.”

An orientation on healing the bay will be given and patrons will be informed as to what they can do to be green and support the surrounding beach and marine environment. Awareness of volunteer events will be made available to all in order to help keep the beaches of Santa Monica clean and a joie de vivre for all.

By mirrormmg August 3, 2011
in Life and Arts
Related Posts