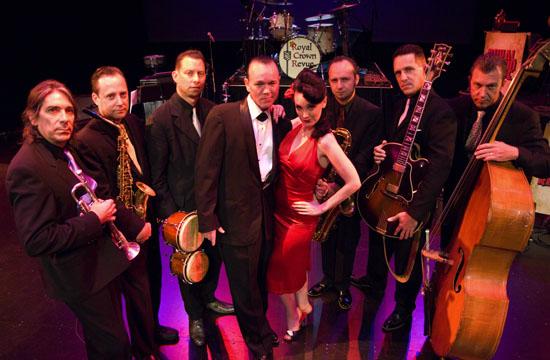 Feel the funk and soul, then swing dance, bop, and boogie with a ‘50s-style night of big band music on Aug. 11 at the sixth installment of free weekly concerts of the Twilight Dance Series at the Santa Monica Pier this summer.

Headlining the event is The Royal Crown Revue (RCR), which has performed at the pier before, but this year’s appearance on Aug. 11 marks the group’s return from a long hiatus. The group has played with a number of celebrities including Broadway star Bette Midler during her 2003-2004 Kiss My Brass Tour. Members of the RCR were also featured in the wacky ‘90s comedy “The Mask.”

RCR’s “Hey Pachuco,” is well known from the Coco Bongo scene that swung Hollywood actors Jim Carrey and Cameron Diaz across the silver screen as they rocked out in a Los Angeles club, The Derby, to the chagrin of big bad Mafioso Peter Greene.

“We are planning to play ‘Hey Pachuco’ and ‘Zip Gun Bop’ during our set,” said tenor saxophonist Mando Dorame.

Dorame plays a 1936 Conn “Naked Lady” saxophone and is set to deliver some soft power and expression to compliment the baritone and alto sax blown by Jim Jedeikin. Dorame also pushes beats on the congas.

This rockabilly swing jazz band has been known to get the crowd dancing from the get- go. “We bring people off their feet,” said Dorame.

Lead singers Eddie Nichols and Jennifer Keith bring their original version of American jazz, conveying a Louie Prima-Keely Smith feeling to their renditions of that classic ‘50s style, augmenting their songs with a little just-for-fun banter.

Eight-piece band Orgone will warm up the crowd for the RCR and is scheduled to go on at 8 p.m. Orgone has previously opened for Al Green and Gil Scott-Heron.

Orgone’s members savor the chance to express their New Orleans influences during their hour-long set that gives the band an opportunity to transform the pier into a rolling Cajun paradise.

“I remember seeing the Neville Brothers at the Santa Monica Pier,” said Rios. “Most of us were raised here and we have always wanted to play at the pier.”

Orgone, a hybrid Afro soul band, flows beats organically from fresh and innovative funk compositions while having a strong understanding of the DJ culture. The band’s deep-rooted appreciation of various forms of music adds to its explosiveness.

“Our music is organic in the sense that as the dance feeds off of us we feed off of it,” said Rios. “It creates a whirlpool in the audience forming this circular type of energy.”

Orgone is planning to play numerous songs off the band’s albums, “Cali Fever,” and “Killion Floor.”

Rios feels fortunate to be on stage alongside soul singer Niki Crawford as well as his big band montage of talented Angelinos.

“Niki has been a professional singer and actress who used to sing backgrounds with Macy Gray and Santana,” Rios said. “She has a sweet gritty southern soul sound.”

He predicts that his high-energy band will have attendees jumping to their feet and dancing on the pier.

“Our music goes over with pretty much anybody who is willing to have a good time,” said Rios.

Artists Ameera and Antonio Fargas will combine their talents and open for this big time event that is pegged to start at 7 p.m. “La Monica Ballroom Then and Now” is the theme for the evening. The dance floor will be rolled out again for all those who wish to swing dance, get down, and boogie on the Santa Monica Pier.

By mirrormmg August 10, 2011
in Life and Arts
Related Posts