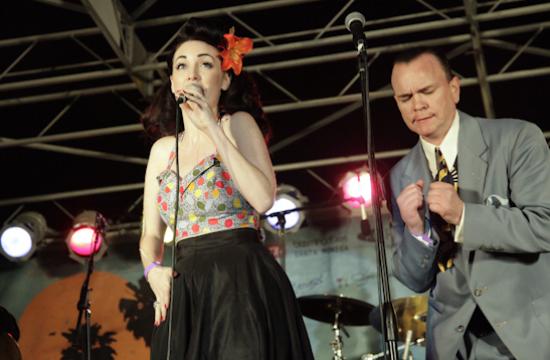 The sixth night of performances at the Twilight Dance Series included three big bands on the Santa Monica Pier headlined by the swing music of the Royal Crown Revue (RCR) and the funk music of Orgone. Singer Ameera combined her talents with Antonio Fargas to open the event themed, “LA Monica Ballroom Then and Now” and had patrons swing dancing the night away on a rolled out dance floor in front of the stage.

“I wanna hear you say, ‘All night long,’” said Ameera over the mic. during her performance.

Ameera was clad in a little black dress, black top, coupled by an elegant multiple-stringed pearl necklace that adorned her neck adding magic to the swing vibe felt around the stage. Co-singer Antonio Fargas wore a black suit and combined his energy with Ameera to start up the swing dancing on the pier.

“He has such a big personality,” said a classy Ameera about the well-dressed Fargas. “I wanted to add that splash to his music.”

Orgone, the next big band, shifted baeats from swing to soul.

“Everyone in the world dreams about being here,” said lead guitarist Sergio Rios. “There’s a good demographic across the board here on the Santa Monica Pier and it’s free.”

Orgone played with Sharon Jones and Daft King this summer while touring around the nation. They just recently returned to California.

“It’s a homecoming for us,” said Rios.

People danced and grooved every which way during Orgone’s concert shaking their bodies to the beats.

“There’s lots of hip-shaking, head-bopping, and parts of your body moving all separate ways,” said Rios.

“Orgone’s music is like a mixture of Santana and solar rock,” said beachgoer Ethan Kahan.

After the “solar rock” ended, the dance beats shifted back to swing as the RCR took the stage.

Professional dancers Brian Lee and Rebecca Tuohino led the pack of talented swing dancers showing off their eight count Lindy Hop dance technique by using advanced foot maneuvering to increase their circular basic mercurial repertoire. Lee, an assistant on the show, Dancing with the Stars, won the American Lindy Hop awards in 2003 as well as being a three-time U.S. Open Swing Dance champion.

Lead singers Eddie Nichols and Jennifer Keith traded off vocals during the set.

Keith looked beautiful and wore a large orange orchid that had the dazzling effect of standing out in her jet-black hair and added strong hints of the summer warmth.

Front man Nichols wore a grey suit and was completely pumped with energy clapping and moving this way and that throughout the entire show. “We’re swinging all day,” said Nichols proudly.

Jedeikin, who plays a Selmer Sax Mark 6, explained the differences between the two saxophonists of the RCR. “I switch off between the alto and baritone saxophone while Mando plays tenor exclusively.”

During the RCR’s song “Hey Pachuco,” a swing hit featured in Jim Carry’s 1994 movie The Mask, each member of the RCR was given his chance to shine under the spotlight.

“Where do you stick the air pump?” said Nichols in jest to Pender’s circular breathing technique he used during a long trumpet solo.

The song “Hey Pachuco” is “about a Mexican American who migrated to L.A. in the ‘30s,” said Dorame. The event was centered in “the Zoot Suit Riots of 1943.”

Pachuco is the self-described term of Mexican Americans who lived in Los Angeles during the World War II era who adopted their own language and style of dress.

The Zoot Suit Riots protested the deportations of Mexican Americans at the time and “Gave us the idea to write the song,” Dorame said. “It’s our only political song.”

At the end of the show, each member of the RCR exited the stage one by one to massive applause from the audience attending the event at the Santa Monica Pier.

“They’re terrific,” said beachgoer and weekly attendee Leah Knight. “This is my favorite band of the series by far and without question.”

By mirrormmg August 13, 2011
in Life and Arts
Related Posts