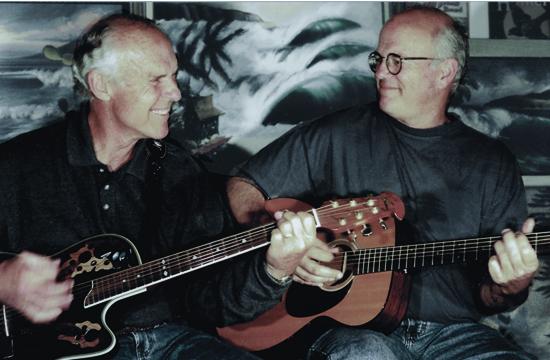 Get amped with some instrumental music at week seven of the Twilight Dance Series as surf guitar artists from The Duo-Tones, The Eliminators, and Slacktone play at the free Thursday concert event at the Santa Monica Pier.

Guitarists Paul Johnson and Gil Orr are headlining as The Duo-Tones at 9 p.m. to the evening theme of “Making Waves: A Night of Surf Guitar,” while The Eliminators will blast at 8 p.m. The epic speed of surf instrumental band Slacktone will open the show at 7 p.m.

“We’re looking forward to it,” Paul Johnson of The Duo-Tones said. “I like the ocean environment.”

Johnson is one of surf music’s earliest founders and the face of classic surf rock today. He began his guitar career in 1960 with the Bel-Airs soon after bands like Link Wray, Duane Eddy, The Fireballs, Johnny and the Hurricanes, and The Ventures had pioneered a sound some would later attribute as forming the blues roots of classic surf rock. The Bel-Airs became famous for the bands hit songs “Mr. Moto,” (1961) and “Volcanic Action” (1961).

“PJ (Paul Johnson) is one of the originators of surf music,” said Joe Kurkowski of The Eliminators. “When I was in my teens, he was already there.”

Paul Johnson and The Bel-Airs began hitting the scene big time and making waves closing out shows in and around the South Bay during the summer of ‘61.

“The origin of the surf music in the ‘60s was a very spontaneous serendipitous occurrence,” Johnson said. “It was just instrumental rock and roll. The surf movement caught on the late ‘50s after the invention of the lightweight surfboard. At that time surfing had become a big fad with the kids. The big thing with surfers was bleached hair and tanned skin. It was a huge fad.”

Johnson and the Bel-Airs took advantage of this “fad” and organized some dance events in Redondo Beach during the summer of ‘61.

“The people we knew were surf guys,” said Johnson about his involvement in organizing dance events at places in and around the Southland such as at the Knights of Columbus Hall.

Johnson recognizes the influence he had in shaping the Southern Californian surf music culture into what later became classified as surf music.

“In the summer of ‘61, a surfer who heard our music said, ‘Wow man, your music feels just like it does out on the wave,” Johnson said. “We were the actual event centered around surfers… (and they) began identifying with it. We had just become aware that Dick Dale, was doing this in Newport Beach.”

As Johnson’s career progressed, he played shows and opened for Jan and Dean and The Beach Boys. “The Beach Boys, who were from Hawthorne, were part of the second sphere of music that came after us,” Johnson said about his music that may have inspired The Beach Boys to write songs like “Surfin’ Safari”(1962).

“I turned down an invitation to join The Beach Boys,” said Johnson.

Johnson is currently with the reformed Safaris, which wrote “Wipeout” (1963) as well as inside The Duo-Tones with Orr.

“I met Gill Orr at a party I had for a CD release of mine in 1995,” Johnson said about the formation of the Duo-Tones.

Gil Orr is one of the long time members of the Chantays, a band near the impact zone of surf music for writing, “Pipeline.”

“At the party we had a jam session,” Johnson said. “At the end of it all, I said ‘Let’s get together again. We should do this more.’”

That’s when the band The Duo-Tones formed and to this day they are, “very passionate about music.”

“All my projects are guitar interplay,” Johnson said of his two-member Duo-Tones band with Orr. “That’s the way we started with the Bel-Airs.”

“We know Paul,” Kurkowski of The Eliminators said. “We’ve played shows with him.”

“Having Bill Swanson adds something different,” Kurkowski said of his band’s locked-in surf sound. “I always thought that it would be cool to form a surf band and bring that old school sound to the forefront.”

The dual surf guitar techniques pioneered by Johnson are lined up inside of The Eliminators with guitarists Kurkowski and John Blair.

Blair was part of the second wave of surf music that took hold in the ‘80s with band Jon and the Nightriders, a band known for its 1979 offshore hit “Rumble at Waikiki.”

“It’s a cool combo because he’s a lead guitar guitarist and his style is unique,” Kurkowski said. “He plays mostly rhythm but we are planning on featuring him at the Twilight Dance Series.”

The Eliminators originally formed onshore at a Doheny Longboard Club party in 1995. Since then The Eliminators have been on the nose having “a purpose,” knowing “exactly what [they] wanted to do.”

The Eliminators have had, “plenty of good luck,” as the riptide has never taken them far out and away from the music scene. In the late ‘90s, The Eliminators were featured on the Left Coast Right Beer Anheuser-Bush TV commercial and this led to them being on the hit TV show “Beverly Hills 90210” where they appeared on three separate occasions. This also led to a live performance on the American talkshow “The View.”

Kurkowski, who “surfs on a regular basis,” plays a 1964 Fender Jaguar electric guitar, is planning on pumping the classic surf guitar “experience for a modern person,” and hopes to lead a new party wave of instrumental surf music.

The Eliminators gained notoriety thanks to their timely arrival on the surf guitar scene in the mid ‘90s. The movies “Pulp Fiction” and “Endless Summer 2” made people aware of surf music,” Kurkowski said.

Dave Wronski is set to lead the line-up in his band Slacktone bringing his version of slashing surf guitar. Slacktone has been known to do a new school cover of Dick Dale’s “Miserlou” (1962) as well as their own version of The Ventures song “Hawaii Five O” (1969). They have even shared the deck onstage with Blair of The Eliminators.

The Duo-Tones will end the Twilight Dance Series event around 10 p.m. but Twilight Dance Series attendees can catch more music at Rusty’s Surf Ranch – a restaurant and bar located on the pier. Rusty’s is having a tailsliding party immediately following the event with surf punk band Papa Fish.

By mirrormmg August 17, 2011
in Life and Arts
Related Posts