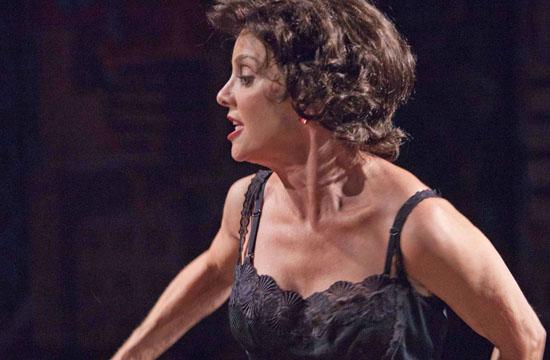 One-person shows can be a wonderfully exciting vehicle for a gifted actor to bring to life historic or famous theatrical figures to give the audience the opportunity to relive their lives. One such brilliant, breathtaking performance that immediately comes to mind is Laurence Fishburne’s performance in “Thurgood” where he meticulously lived in the famous jurist’s skin, but also filled the stage with other unseen, but very real characters.

Vivien Leigh is clearly one of the most beautiful, legendary actors of the last century with her characterizations of Scarlett O’Hara in the seminal “Gone with the Wind” and Blanche DuBois in “A Streetcar Named Desire” earning her two Academy Awards. Despite her great success, her life was troubled, both in her marriage to Sir Laurence Olivier as well as her bouts with mental illness. She tragically died from tuberculosis at age 53.

Playwright Rick Foster tried to illuminate this fascinating life in his overwritten, dreary play “Vivien,” that hadn’t been staged in 10 years, a warning that should have been heeded. With such a complex character to create, it would have taken a heightened stage presence and keen acting skills to hold the stage for 90 minutes. However, under the directionless direction of Elina de Santos, Judith Chapman’s portrayal as “Vivien” was a self-indulgent, interminable, most forgettable exercise. Chapman fails on almost all levels as her vocal delivery is monotonous, and the words are often garbled, and in very short order, her unfulfilled transitions become as predictable as her unimaginative blocking. Chapman tries, but fails to conger up some of the people in Leigh’s life including her husband Olivier, Noel Coward, Winston Churchill, Katharine Hepburn, Darryl F. Zanuck, and theatre critic Kenneth Tynan.

Chapman’s Vivien quotes passages as Juliet from “Romeo and Juliet” and what is a hair-raising speech by Lady MacBeth, but alas both sounded pretty much alike in the delivery. We are also supposed to see her make love to Peter Finch, but the problem is we never see these historic characters as Chapman is unfocused in her delivery and uses the same tone and physical life when speaking to each of them. We don’t see them through her eyes because she doesn’t appear to have the acting technique to pull it off.

Soap opera acting, in which histrionics are perfectly acceptable, does not make a theatrical actress as the requirements are diametrically opposed such as digging deeply into the psychological make-up of the character to find the subtleties and nuances of the behavior. This performance lacked that shading, some of the fault of which must be laid directly at the feet of the usually competent de Santos whose directing expertise was sorely missing. Granted, the material itself is not that interesting and at the very least should have been cut by 30 minutes. That said, however, with Meryl Streep acting and Ron Howard directing, even this poor material could have been somewhat compelling.

If we were to meet Vivien Leigh for the first time, as presented to us in this production, we would only know an angry woman, devoid of any humor, and slowly descending into madness. The only laugh of the evening was when Chapman used the F…word, always good for a cheap laugh and “Frankly my dear, I don’t give a damn.”

By mirrormmg August 28, 2011
in Life and Arts
Related Posts