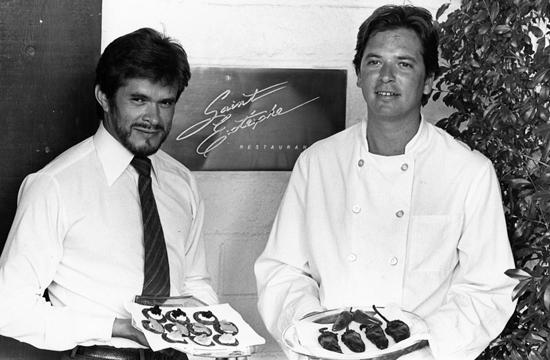 The Santa Monica Farmers Market isn’t the only force in the local food world that’s celebrating a 30-year milestone this month.

The southwestern fusion cuisine of Saint Estèphe – a progressive 1980s restaurant opened by chef John Sedlar in Manhattan Beach – is being celebrated in a month-long retrospective at Sedlar’s restaurant, Rivera, in downtown Los Angeles. This is an unusual chance to travel backward in time and taste food from a very different era of Los Angeles dining.

“These days many people are looking forward at what’s coming up next, but we started looking backwards. Saint Estèphe was very fun, it was fun living by the beach, and that era was very interesting,” said Sedlar of his first restaurant.

Saint Estephe’s menu was in French, because “in that era, we weren’t ready to let go of our europhile infatuations; we weren’t confident that Latin food would have the legs to stand on its own,” Sedlar said.

His later restaurants included Bikini, a southwestern cuisine restaurant on Fifth Street in Santa Monica that closed after the 1994 Northridge earthquake and was later reopened as Abiquiu. Rivera and Playa are his current restaurants.

John Sedlar is a chef who wants to tell the evolving story of Latin cuisine. He grew up in Santa Fe, New Mexico, was trained in classic French cuisine, and put Saint Estèphe on the map when he put southwest American and French cooking together in a new way that he called modern southwestern cuisine. His cooking was equally famous for its edgy presentation, in which plates became canvases for visual art and evocative messages.

Thirty years later, Sedlar notes how much food has changed in Los Angeles, and how much more knowledgeable diners are now about food. “When I was cooking at Saint Estèphe, all the food had to be subtle – it couldn’t be too hot or spicy. Now people want flavors that grab you by the throat. They want true, good, honest cooking that’s not so composed, a little more casual. It’s gone in a nice direction,” Sedlar told The Mirror.

Through September, classic dishes that were served during the 1980s at Saint Estèphe will be on a special menu at Rivera. The Kachina face mosaic composed of American caviar, egg, and endive “feathers” is a fine example of Sedlar’s presentation of southwestern colors, and the Chimayo Chile Relleno, filled with a rich mushroom duxelle and served with a cream sauce, recalls a time when French and southwestern cuisines first formally met.

Sedlar also plans to open a small food museum in downtown Los Angeles and will begin showing exhibits in October about comida hispanica and five centuries of cuisine in Los Angeles. The museum will have a restaurant.

By mirrormmg September 20, 2011
in Life and Arts
Related Posts