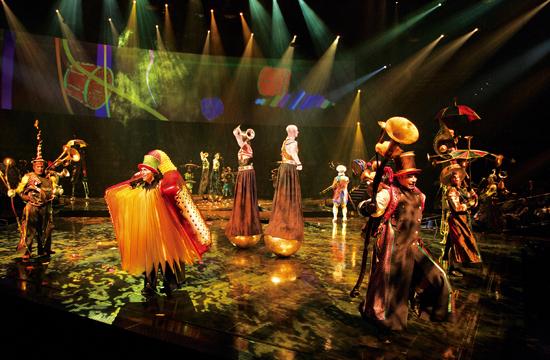 The spirit of The Beatles lives on in the form of “LOVE,” the Cirque du Soleil production that’s been entertaining audiences at The Mirage in Las Vegas for more than five years.

While the acrobatics aren’t as death defying as other Vegas cirque shows such as Mystère at Treasure Island or KÀ at MGM Grand, what you do get is a visual and musical feast that loosely follows The Beatles’ journey to stardom.

All the music is pre-recorded, courtesy of master tapes from Abbey Road Studios, and silhouettes of John Lennon, Paul McCartney, George Harrison, and Ringo Starr sporadically appear throughout the show on 100-foot screens. These collages use sound bites to create fictionalized intimate conversations between the band members.

Dominic Champagne, who directed and wrote the original concept for the show, has created a Beatles experience, rather than a Beatles story, taking the audience on an emotional journey rather than a chronological one.

It explores the landscapes and experiences that have marked the group’s history with abstract characters inspired by lyrics from The Beatles.

“Nowhere Land” kicks-off the show with the four Nowhere Men, Sgt. Pepper and The Fool, who take to the stage with electric dance moves and cross the metaphoric threshold into The Beatles world.

What follows in the rest of the musical scenes are highlights of the English rock band in the 1960s.

From the ports of Liverpool, to the pulse of Abbey Road, to scenes that remind the audience of the grim realities of WWII, the diverse settings constantly help to change up the pace of the show.

One of the most memorable musical pieces of the show is when “I Want to Hold Your Hand” is followed by a medley of “Drive My Car,” “What You’re Doing,” and “The Word,” which signaled the euphoric onslaught of Beatlemania, as it was termed, to describe the frenzy toward The Beatles.

Crazed fans and screaming groupies bombard the stage in a flurry of acrobatic activity featuring teeter boards and trampoline beds that launch the ensemble to new heights — just as these early hits launched The Beatles to astronomical fame.

Throughout the show there are all the hits you would expect: “Help!”, “Yesterday,” “Come Together,” “Hey Jude,” and of course, “All You Need is Love.”

The list of hits is too long to name, but with 130 songs sampled throughout the show, there are many less-known Beatles songs that make the show unique, so it’s not just a compilation of “Best of’s.”

It is interesting to note “LOVE” was born out of a personal friendship and mutual admiration between the late George Harrison and Cirque du Soleil founder Guy Laliberté back in 2000.

After many years of discussion, negotiations, and creation, the show premiered in 2006 with the all-new “LOVE” theater replacing the space previously occupied by Siegfried & Roy.

For Beatles fans visiting Vegas, it is definitely worth booking tickets in advance as shows do sell-out.

The “LOVE” Theater – The Mirage

By mirrormmg September 27, 2011
in Life and Arts
Related Posts