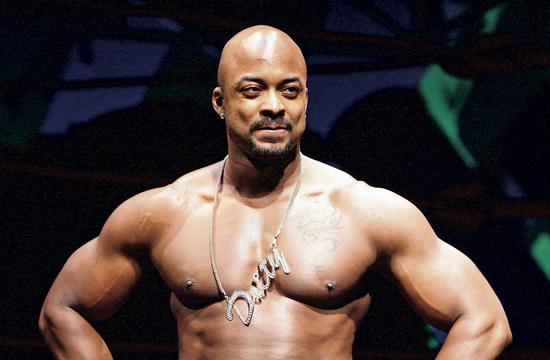 Guided by the superb direction of Edward Torres, Kristoffer Diaz’s “The Elaborate Entrance of Chad Deity,” 2010 Pulitzer Prize finalist for Drama, hit the Geffen Playhouse with a thunderous body slam, dazzling the senses with a profusion of sights, sounds, and crisp dialogue that could be described as brilliant prose poetry.

Functioning as a one-man Greek chorus throughout the play, the opening monologue, delivered by the most talented Desmin Borges as Mecedonio Guerra, a.k.a. Mace, prepares the audience for what is about to unfold. Breaking the fourth wall, an excellent directorial choice when delivering long monologues, Mace engages the audience, sharing recollections about how his fascination with the world of wrestling began as a young boy and while his friends were playing with action figures, he was playing with wrestling figures.

Throughout the play, Mace shares his private inner monologue with the audience, commenting on the mechanics of staging the wrestling matches and the pleasure he gets on being the fall guy or “Jobber to the stars” for super star and world champion Chad Deity, skillfully played by Terence Archie. With vocal variety and impeccable comic timing, Archie struts his half-naked body through the audience and on stage with the air and elegance of a true prima donna. The truth is Deity is only as good as Mace makes him look in the ring, which is set against a spectacular psychedelic set design by Brian Sidney Bembridge, and through the enhancing light design by Jesse Klug, turns the stage into a three-dimensional sensory experience.

Throughout the action, Mace slowly reveals the lack of a moral compass inherent in the world of wrestling as embodied in the character of his boss, Everett K. Olson (EKO) who, dressed in ostentatious shark skin suits by Costume Designer Christina Haatainen Jones, is played with just the right amount of sleaze by Steve Valentine, portraying the quintessential amoral opportunist, turning potentially negative situations into a box office bonanza. Mace always agrees with EKO’s decisions, but reveals his true feelings to the audience.

As the action unfolds, we meet Vigneshwar Paduar (VP), a local homeboy with great champion potential, played by Usman Ally, who flies around the stage with the grace of a trapeze artist. EKO is overjoyed at having a Muslim wrestler and comes up with a move he calls “The Camel Clutch,” “Because you people ride camels,” and elaborates that this deadly move emanated from “The shadowy nature of a sleeper cell.”

A wrestling act is concocted between Mace and “The Fundamentalist,” dressed in a loincloth, and Mace, dressed as a Mexican bandito named Che Chavez Castro, replete with a black sombrero and the traditional bullet belt crisscrossing his chest. But, all is not going well, as VP freezes on his first match but recovers just in time to knock out his opponent with one swift kick. Deity becomes jealous of VP’s burgeoning success and VP begins to build up resistance to looking so ridiculous and achieving phony success in only two matches and one move and makes an unexpected decision.

In the very realistic wrestling scenes, choreographed to perfection by fight director David Woolley, the audience actually gasped several times as one of the real wrestlers, played by Texas Heavyweight Champion Timothy Talbott, in the dual roles of Billy Heartland and Old Glory, hit the deck in a thunderous crash. Leaping into the ring as “The Bad Guy” was Justin Leeper, the other professional wrestler, adding to the authenticity of the action. During the fight scenes, the audience is assaulted with a profusion of flashing lights and sound designer Mikhail Fiksel’s deafening sounds, including a clever signature tone underscoring the scene and character transitions. Peter Nigrini’s production and video design is an additional technical treat as we see the action on stage flashed on giant screens, adding to the authenticity of a live wrestling match.

One could easily conclude that this play is a spoof on wrestling associations and leave it at that. However, Diaz’s compelling play goes far beyond that particular theatrical world and serves as a metaphor that can be applied to banks, Wall Street, and the state of geopolitics, making Mace’s words “Why are they rooting for the bad guys?” profound and timely in view of the real world in which we live.

By mirrormmg September 20, 2011
in Life and Arts
Related Posts