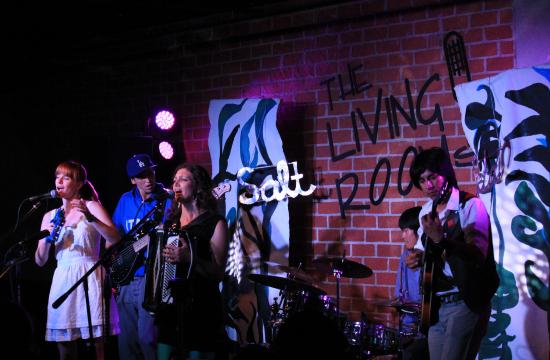 Salt Petal, a Los Angeles-based band, played at the Living Room at Loyola Marymount University on Wednesday Sept. 28 at an event sponsored by Showcase L.A.

Showcase L.A. celebrates local Latino/a talent from the region, which gives students of Latin heritage a cultural event to be proud of at the beginning of the school year.

The night began with students reading a number of student selected Spanish poems prior to the main music event featuring Salt Petal.

Originally from San Francisco, Autumn Harrison took lead vocals and played the accordion while Dayna Richards blew the trumpet taking back up vocals.

After the cultural event, Harrison explained how Salt Petal came up with their music.

“Especially with songs that have a lot of rhythm, we try to fill in spaces,” said Harrison. “We are always moving and trying to put something in that space.”

Harrison spent some time in Brazil. This helped shape the unique Latin sound of Salt Petal.

“We have some background in South American folk,” Harrison said.

Their song “Todo de ti,” got a number of students moving to the various Cumbia beats on the dance floor anchored by Japanese drummer Hiroo Nakano.

Richards seemed extraordinarily excited throughout the set and her trumpet playing was one of the highlights of the show along with the Harrison’s accordion.

By mirrormmg October 2, 2011
in Life and Arts
Related Posts